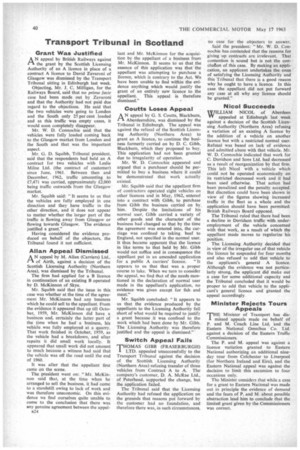 Page 42, 17th May 1963 — Transport Tribunal in Scotland
Close
Noticed an error?
If you've noticed an error in this article please click here to report it so we can fix it.
Keywords : Appeal, Appellate Review, Lawsuits, Legal Procedure, Law / Crime, Business / Finance

Grant Was Justified ANappeal by British Railways against the grant by the Scottish Licensing Authority of an A licence in place of a contract A licence to David Zavaroni of Glasgow was dismissed by the Transport Tribunal sitting in Edinburgh last week.

Objecting, Mr. J. C. Milligan, for the Railways Board, said that no prima facie case had been made out by Zavaroni and that the Authority had not paid due regard to the objections. He said that the two vehicles were going to London and the South only 25 per cent loaded and as this traffic was empty cases, it would soon completely disappear.

Mr. W. D. Connochie said that the vehicles were fully loaded coming back to the Glasgow market from London and the South and that was the important aspect Mr. G. D. Squibb, Tribunal president, said that the respondents had held an A contract for two vehicles with Leslie Milne Ltd. (the contract of customer) since June, 1961. Between then and December, 1962, traffic amounting to £7,471 was carried, approximately £2.000 being traffic outwards from the Glasgow market.

Mr. Squibb said: " It seems to us that the vehicles are fully employed in one direction and they have traffic in the other direction, and it does not appear to matter whether the larger part of the traffic is flowing away from Glasgow or flowing towards Glasgow. The evidence justified a grant."

Having considered the evidence produced on behalf of the objectors, the Tribunal found it not sufficient.

Allan Appeal Dismissed A N appeal by M. Allan (Carriers) Ltd., of Airth, against a decision of the Scottish Licensing Authority (Northern Area), was dismissed by the Tribunal. The firm had applied for a B licence in continuation of an existing B operated by D. McKinnon of Skye.

Mr. Squibb said that the issue in this case was whether at the time of the agreement Mr. McKinnon had any business which he could sell to the appellant. From the evidence it appeared that up till October, 1959, Mr. McKinnon did have a business and, certainly the latter part of the time when he had a business, his vehicle was fully employed at a quarry. That work finished in October, 1959, as the vehicle had a breakdown, and after repairs it did small work locally. It appeared that small work did not amount to much because a witness had said that the vehicle was off the road until the end of 1960.

It was after that the appellant first came on the scene.

The president went on: "Mr. McKinnon said that, at the time when he arranged to sell the business, it had come to a standstill owing to lack of work and was therefore uneconomic. On this evidence we find ourselves quite unable to come to the conclusion that there was any genuine agreement between the appel 1324 lant and Mr. McKinnon for the acquisition by the appellant of a business from Mr. McKinnon. It seems to us that the essence of this application was that the appellant was attempting to purchase a licence, which is contrary to the Act We have been unable to find within the evidence anything which would justify the grant of an entirely new licence to the appellant. This appeal is therefore dismissed."

Coutts Loses Appeal AN appeal by G. S. Coutts, Blackburn, Aberdeenshire, was dismissed by the Tribunal in Edinburgh. The appeal was against the refusal of the Scottish Licensing Authority (Northern Area) to grant an A licence, to continue the business formerly carried on by D. C. Gibb, Blackburn, which they proposed to buy. This application had not been granted due to irregularity of operation.

Mr. W. D. Connochie appeared and argued that a purchaser should be permitted to buy a business where it could be demonstrated that work actually existed.

Mr. Squibb said that the appellant firm of contractors operated eight vehicles on other licences and in May, 1962, entered into a contract with Gibb, to purchase from Gibb the business carried on by him. Despite the limitations of his normal user, Gibb carried a variety of other goods and the character of the business had changed so that by the time the agreement was entered into, the carriage was confined to taking beef to England, not specified in the normal user. It thus became apparent that the licence in like terms to that held by Mr. Gibb would not suffice and in consequence the appellant put in an amended application for a public A carriers' licence. "It appears to us that that was a proper course to take. When we turn to consider the appeal, we find that of the needs mentioned in the declaration of normal user made in the appellant's application, no evidence was given except for fish and meat."

Mr. Squibb concluded: "It appears to us that the evidence produced by the appellants to the Licensing Authority fell short of what would be required to justify a grant because it was confined to the work which had been done by Mr. Gibb. The Licensing Authority was therefore justified and the appeal is dismissed."

THOMAS GIBB (FRASERBURGH) I LTD. appealed unsuccessfully to the Transport Tribunal against the decision of the Scottish Licensing Authority (Northern Area) refusing transfer of three vehicles from Contract A to A. The company's customer, D. A. McRae Ltd., of Peterhead, supported the change, but the application failed.

The Tribunal said that the Licensing Authority had refused the application on the grounds that reasons put forward by the customer had no foundation, and therefore there was, in such circumstances. no case for the objectors to answer.

Said the president: "Mr. W. D. Connochie has contended that the reasons for giving up contracts are irrelevant. That contention is sound but is not the concluglon of this case. By making an application, an applicant undertakes the onus of soisfying the Licensing Authority and this Tribunal that there is a good reason why he ought to have a licence. In this case the appellant did not put forward any case at all why any licence should be granted."

Nicol Succeeds w1TJ IAM NICOL of Aberdeen appealed at Edinburgh last week against a decision of the Scottish Licensing Authority (Northern Area) refusing a variation of an existing A licence by the addition of a vehicle on another licence but with a restricted normal user. Refusal was based on lack of evidence and admitted abuse with that vehicle. Mr. W. D. Connochie indicated that work for C. Davidson and Sons Ltd. had decreased as a result of reorganization by that firm. This left Nicol with a vehicle which could not be operated economically on its restricted decreased work and it had been used otherwise. That action had been penalized and the penalty accepted. But discretion could have been shown in view of the figures showing increased traffic in the fleet as a whole and the application should have been permitted. British Railways Board opposed.

The Tribunal ruled that there had been a decline in Davidson traffic with underemployment of the vehicle concerned with that work, as a result of which the appellant made moves to regularize his position.

Minister Rejects Tours Appeals THE Minister of Transport has dismissed appeals made on behalf of P. and M. Coach Line Ltd. "and the Eastern National Omnibus Co. Ltd. against a decision of the Eastern Traffic Commissioners.

The Minister considers that while a case for a grant to Eastern National was made out in principle the evidence of demand and the fears of P. and M. about possible abstraction lead him to conclude that the limited grant given by the Commissioners was correct.