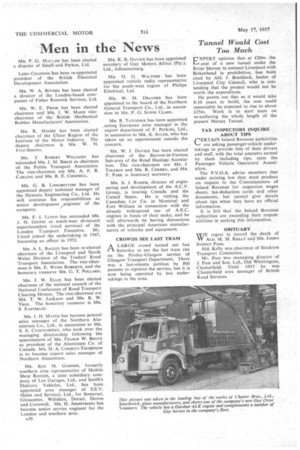 Page 32, 17th May 1957 — Men in the News
Close
Noticed an error?
If you've noticed an error in this article please click here to report it so we can fix it.
Keywords :

MR. P. G. MALLAM has been elected a director of Small and Parkes, Ltd.

LORD CHANDOS has been re-appointed president of the British Electrical Development Association.

MR. W A. RIVERS has been elected a director of the London-based companies of Fisher Renwick Services, Ltd.

MR. R. MOORE has been elected chairman of the Ulster Region of the Institute of the Motor Industry. The deputy chairman is MR. W. H. Firz-Stmoms.

MR. G. B. LONGBOTTOM has been appointed deputy technical manager of the Hymatic Engineering Co., Ltd. He will continue his responsibilities as senior development engineer of the company.

MR. A. L. BAGLEY has been re-elected chairman of the Liverpool and North Wales Division of the Traders' Road Transport Association. The vice-chairman is MR. E. WYNN ROBE.RTS, and the honorary treasurer MR. G. T. Powato.

MR. J. W. Eiais has been elected chairman of the national council of the National Conference of Road Transport Clearing Houses. The vice-chairmen are MR. T. W. JAcicsoN and MR. R. W. TREE. The honorary treasurer is MR. S EASTMEAD.

MR. W. M. DRAYERS has been appointed to the board of the Northern General Transport Co., Ltd., in succession VD MR. P. G. STONE CLARK.

MR. R. TATCHNER has been appointed acting European zone manager in the export department of F. Perkins, Ltd., in succession to MR. A. ALLES, who has taken up an appointment outside the concern.

MR. W. J. DAVIES has been elected chairman of the Barrow-in-Furness Sub-area of the Road Haulage Association. The vice-chairmen are MR. J. ToLFREE and MR. R. CHERRY, and MR. F. PARK is honorary secretary.

MR. A. J. ROMER, director of engineering and development of the A.C.V. Group, is touring Canada and the United States. He is visiting the Canadian Car Co. in Montreal and Fort William in connection with the already widespread use of A.E.C. engines in buses of. their make, and-he will afterwards .be having discussions with the principal American manufacturers of vehicles and equipment.

ALARGE crowd turned out last Saturday to see the last tram run on the Paisley-Glasgow service of Glasgow Transport Department. There was a last-minute petition by 800 persons to reprieve the service, but it is now being operated by bus undertakings in the area.