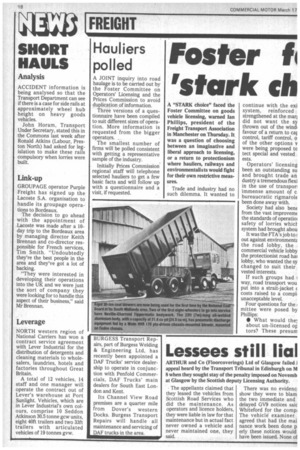 ACCIDENT information is being analysed so that the Transport Department can see if there is a case for side rails at approximately wheel hub height on heavy goods vehicles.

John Horam, Transport Under Secretary, stated this in the Commons last week after Ronald Atkins (Labour, Preston North) had asked for legislation to make these rails compulsory when lorries were built.

GROUPAGE operator Purple Freight has signed up the Lacoste S.A. organisation to handle its groupage operations to Bordeaux.

The decision to go ahead with the appointment of Lacoste was made after a 10day trip to the Bordeaux area by managing director Keith Brennan and co-director responsible for French services, Tim Smith. "Undoubtedly they're the best people in the area and they've got a lot of backing.

"They were interested in developing their operations into the UK and we were just the sort of company they were looking for to handle this aspect of their business," said Mr Brennan.

NORTH western region of National Carriers has won a contract service agreement with Lever Industrial for the distribution of detergents and cleaning materials to wholesalers, laundries, hotels and factories throughout Great Britain.

A total of 12 vehicles, 14 staff and one manager will operate the contract out of Lever's warehouse at Port Sunlight. Vehicles, which are in Lever Industrial's own colours, comprise 10 Seddon Atkinson 30.5 tonne gcw units, eight 40ft trailers and two 33ft trailers with articulated vehicles of 19 tonnes gvw.