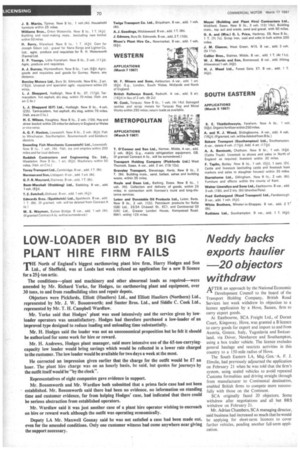 TiE North of England's biggest earthmoving plant hire firm, Harry Hodges and Son Ltd., of Sheffield, was at Leeds last week refused an application for a new B licence for a 25-1--ton artic.

The conditions-plant and machinery and other abnormal loads as required-were amended by Mr. Richard Yorke, for Hodges, to: earthmoving plant and equipment, over 30 tons, to and from roadbuilding sites and repair depots.

Mr. Yorke said that Hodges' plant was used intensively and the service given by lowloader operators was unsatisfactory. Hodges had therefore purchased a low-loader of an improved type designed to reduce loading and unloading time substantially.

Mr. H. Hodges said the loader was not an uneconomical proposition but he felt it should be authorized for some work for hire or reward.

Mr. H. Andrews, Hodges plant manager, said more intensive use of the 65-ton-carryingcapacity low loader would bring savings which would be reflected in a lower rate charged to the customer. The low loader would be available for two days a week at the most.

He corrected an impression given earlier that the charge for the outfit would be 17 an hour. The plant hire charge was on an hourly basis, he said, but quotes for journeys by the outfit itself would be "by the clock".

Mr. Bosomworth and Mr. Wardlaw both submitted that a prima facie case had not been established. Mr. Bosomworth said there had been no evidence, no information on standing time and customer evidence, far from helping Hodges' case, had indicated that there could be serious abstraction from established operators.

Mr. Wardlaw said it was just another case of a plant hire operator wishing to encroach on hire or reward work although the outfit was operating economically.

Deputy LA Mr. Maxwell Gosnay said he was not satisfied a case had been made out, even for the amended conditions. Only one customer witness had come anywhere near giving the support necessary.