OPINIONS and QUERIES A CRY OF PROTEST FROM A SMALL HAULIER. 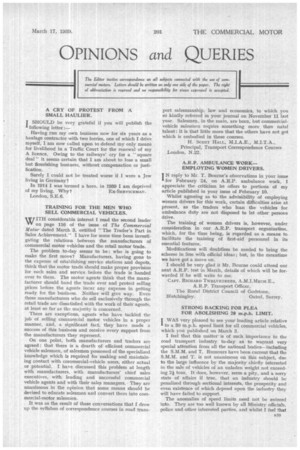 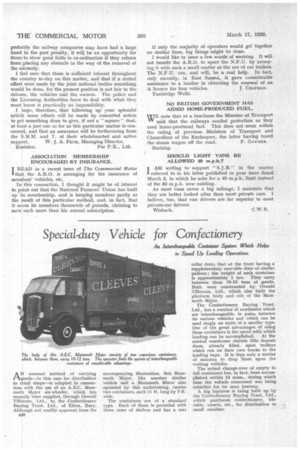 Page 53, 17th March 1939 — OPINIONS and QUERIES A CRY OF PROTEST FROM A SMALL HAULIER.
Close
Noticed an error?
If you've noticed an error in this article please click here to report it so we can fix it.
Keywords : Steam Wagon, Van, Ambulance

JSHOULD be very grateful if you will publish the following letter :— Having run my own business now for six years as a haulage contractor with two lorries, one of which I drive myself, I am now called upon to defend my only means for livelihood in a Traffic Court for the renewal of my A licence. Owing to the railways' cry for a "square deal" it seems certain that I am about to lose a small but flourishing business, without compensation or justification.

Surely I could not be treated worse if I were a Jew living in Germany?

TRAINING FOR THE MEN WHO SELL COMMERCIAL VEHICLES.

wITH considerable interest I read the second leader on page 116 of the issue of The Commercial Motor dated March 3, entitled "The Trader's Part in Sales Achievement." I have for some time been investigating the relations between the manufacturers of commercial motor vehicles and the retail motor trade.

The problem to-day seems to be : who is going to make the first move? Manufacturers, having gone to the expense of establishing service stations and depots, think that the motor trade should make proper provision for such sales and service before the trade is handed over to them. The motor agents think that the manufacturer should hand the trade over and protect selling prices before the agents incur any expense in getting ready for the business. Neither will give way. Even those manufacturers who do sell exclusively through the retail trade are dissatisfied with the work of their agents, at least so far as the majority is concerned.

There are exceptions, agents who have tackled the job of selling commercial motor vehicles in a proper manner, and, a significant fact, they have made a success of this business and receive every support from the manufacturers they represent.

On one point, both manufacturers and traders are agreed : that there is a dearth of efficient commercial vehicle salesmen, of salesmen possessed of the specialized knowledge which is required for making and maintaining contact with commercial-vehicle users, either actual or potential. I have discussed this problem at length with manufacturers, with manufacturers' chief sales executives, with leading and successful commercial vehicle agents and with their sales managers. They are unanimous in the opinion that sonic means should be devised to educate salesmen and convert them into commercial-motor salesmen.

port salesmanship, law and economics, to which you so kindly referred in your journal on November 11 last year. Salesmen, in the main, are born, but commercialvehicle salesmen require something more than natal talent: it is that little more that the others have not got which is embodied in these courses.

IN reply to Mr. T. Bourne's observations in your issue I for February 24, on A.R.P. ambulance work, I appreciate the criticism he offers to portions of my article published in your issue of February 10.

Whilst agreeing as to the advisability of employing women drivers for this work, certain difficulties arise at present, as the traders who loan the vehicles for ambulance duty are not disposed to let other persons drive.

The training of women drivers is, however, under consideration in our A.R.P. transport organization, which, for the time being, is regarded as a means to facilitate the training of first-aid personnel in its essential features.

Modifications will doubtless be needed to bring the scheme in line with official ideas ; but, in the meantime we have got a move on.

I should be very glad it Mr. Bourne could attend our next A.R.P. test in March, details of which will be forwarded if he will write to me.

WAS very pleased to see your leading article relative to a 30 m.p.h. speed limit for all commercial vehicles, which you published on March 3.

I feel that this matter is of such importance to the road transport industry to-day as to warrant very special attention from all the national bodies—including the S.M.M. and T. Rumours have been current that the S.M.M. and T. is not unanimous on this subject, due to the large influence by the Majority chiefly interested in the sale of vehicles of an unladen weight not exceeding ai tons. It does, however, seem a pity, and a sorry state of affairs if true, that an industry should be penalized through sectional interests, the prosperity and even existence of which depend upon the industry they will have failed to support.

The anomalies of speed limits need not be entered into. They are too well known by all Ministry officials, police and other interested parties, and whilst I feel that 535 probably the railway companies may have had a large hand in the past penalty, it will be an opportunity for them to show good faith in co-ordination if they refrain from placing any obstacle in the way of the removal of the anomaly.

I feel sure that there is sufficient interest throughout the country to-day on this matter, and that if a united effort were made by the joint national bodies something would be done, for the present position is not fair to the drivers, the vehicles and the owners. The police and the Licensing Authorities have to deal with what they must know is practically an impossibility.

I hope, therefore, that following up your splendid article some efforts will be made by concerted action to get something done to give, if not a " square " deal, at least a just one so far as this particular matter is concerned, and that an assurance will be forthcoming from the S.M.M. and T. of their wholehearted and active support. W. J. A. PECK, Managing Director, Rushden. For P.X., Ltd.

IREAD in a recent issue of The Commercial Motor that the A.R.O. is arranging for the insurance of members' vehicles, etc.

In this connection, I thought it might be of interest to point out that the National Farmers' Union has built up its membership, .and is keeping members partly as the result of this particular method, and, in fact, that it saves its members thousands of pounds, claiming to save each more than his annual subscription. If only the majority of operators would get together on similar lines, big things might be done.

I would like to issue a few words of warning. It will not benefit the A.R.O. to upset the N.F.U. by annoying it with such a small matter as the use of car trailers. The N.F.U. can, and will, be a real help. In fact, only recently, in East Sussex, it gave considerable assistance to a haulier in obtaining the renewal of an A licence for four vehicles. J. CHAPMAN. Tunbridge Wells.

WE note that at a luncheon the Minister of Transport YV said that the railways needed protection as they used home-produced fuel. This does not seem within the ruling of previous Ministers of Transport and Chancellors of the Exchequer, the latter having taxed the steam wagon off the road. F. GOYMER. Barking.

IAM writing to support " S.J.B." in the matter referred to in his letter published in your issue dated March 3, in which he asks for a 40 m.p.h. limit instead of the 30 m.p.h. now existing.

As most vans cover a big mileage, I maintain that they are better looked after than most private cars. I believe, too, that van drivers are far superior to most private-car drivers.