St. Helens Well-satisfied with the Results Over Nine Months 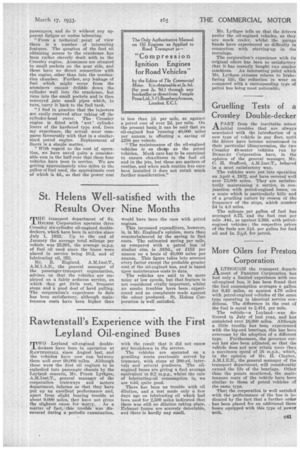 Page 91, 17th March 1933 — St. Helens Well-satisfied with the Results Over Nine Months
Close
Noticed an error?
If you've noticed an error in this article please click here to report it so we can fix it.

THE transport department of Sr. HELENS Corporation operates three Crossley six-cylinder oil-engined doubledeckers, which have been in service since July 1, 1932. 'Up to the end of January the average total mileage per vehicle was 25,901, the average m.p.g. of fuel oil used since the buses were placed in service being 10.2, and of lubricating oil, 352.

Mr. B. England, A.M.Inst.T., A.M.I.A.E., the general manager of the passenger-transport organization, advises us that the vehicles are employed on a fairly arduous service, on which they get little rest, frequent stops and a good deal of hard pulling. The corporation's experience to date has been satisfactory, although maintenance costs have been higher than would have been the case with petrol engines,

This increased expenditure, however, is, in Mr. England's opinion, more than counterbalanced by the saving in fuel coats. The estimated saving per mile, ELS compared with a petrol bus of similar size, is .91943., or £153 per annum on a basis of 40,000 miles per annum. This figure takes into account every factor except the probable greater cost of the oil-engined bus, and is based upon maintenance costs to date.

The vehicles are said to be more noisy at low speeds, but that feature is not considered vitally important, whilst no smoke troubles have been . experienced and no complaints made against the odour produced. St. Helens Corporation is well satisfied.