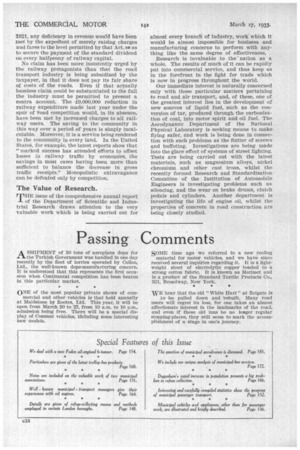 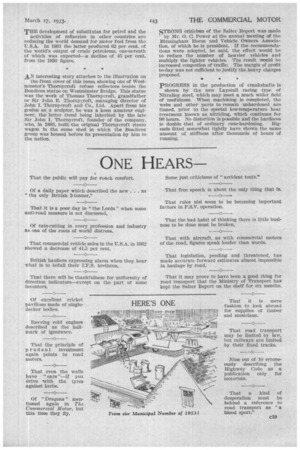 ASHIPMENT of 30 tons of aeroplane dope for the Turkish Government was handled in one day recently by the fleet of lorries operated by Cellon, Ltd., the well-known dope-manufacturing concern. It is understood that this represents the first occasion when Continental competition has been beaten in this particular market.

ONE of the most popular private shows of com mercial and other vehicles iS that held annually at Maidstone by Rootes, Ltd. This year, it will be open from March 20 to 25, from 10 a.m. to 10 p.m., admission being free. There will be a special display of Commer vehicles, idcluding some interesting new models. SOME time ago we referred to a new roofing material for motor vehicles, and we have since received several inquiries regarding it. It is a lightweight sheet of electrolytic copper bonded to a strong cotton fabric. It is known as Merimet and is a product of the Standard Textile Products Co., 321, Broadway, New York.

WE hear that the old "White Hart" at Reigate is

10 be pulled down and )rebuilt. Many road users will regret its loss, for one takes an almost affectionate interest in the landmarks of the road, and even if these old inns be no loner regular stopping-places, they still seem to mark the accomplishment of a stage in one's journey.

THE development of substitutes for petrol and the activities of refineries in other countries are reducing the world demand for motor fuel from the U.S.A. In 1931 the latter produced 62 per cent. of the world's output of crude petroleum; one-seventh of which was exported—a decline of 45 per cent. from the 1930 figure.

AN interesting story attaches to the illustration on

STRONG critic-1m of the Salter Report was made by Mr. 0. C. Power at the annual meeting of the Birmingham Horse and Vehicle 'Owners Association, of which he is president. If the recommendations were adopted, he said, the effect would be to reduce the number of heavier vehicles and multiply the lighter vehicles. The result would be increased congestion of traffic. The margin of profit to-day was not sufficient to justify the heavy charges proposed.

PROGRESS in the production of Crankshafts is shown by the new Laystall racing type of Nitralloy steel, which may meet a much wider field, of usefulness. When machining is completed, the webs and other parts to remain unhardened are tinned, prior to the special low-temperature heat treatment known as nitriding, which continues for 90 hours. No distortion is possible and the hardness is double that of ordinary case-hardening. Bigends fitted somewhat tightly have shown the same amount of stiffness after thousands of hours of running.