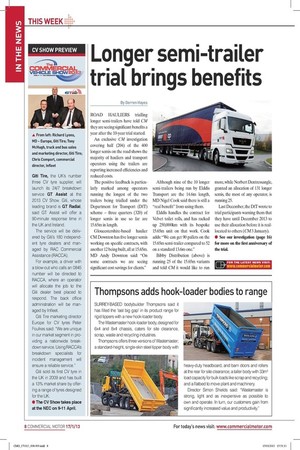 Page 6, 17th january 2013 — Longer semi-trailer trial brings benefits
Close
Noticed an error?
If you've noticed an error in this article please click here to report it so we can fix it.

By Derren Hayes ROAD HAULIERS trialling longer semi-trailers have told CM they are seeing significant benefits a year after the 10-year trial started.

An exclusive CM investigation covering half (204) of the 400 longer semis on the road shows the majority of hauliers and transport operators using the trailers are reporting increased efficiencies and reduced costs.

The positive feedback is particularly marked among operators running the longest of the two trailers being trialled under the Department for Transport (DfT) scheme — three quarters (320) of longer semis in use so far are 15.65m in length.

Gloucestershire-based haulier CM Downton has five longer semis working on specific contracts, with another 12 being built, all at 15.65m. MID Andy Downton said: "On some contracts we are seeing significant cost-savings for clients."

Although nine of the 10 longer semi-trailers being run by Elddis Transport are the 14.6m length, MID Nigel Cook said there is still a "real benefit" from using them.

Bibby Distribution (above) is running 25 of the 15.65m variants and told CM it would like to run more, while Norbert Dentressangle, granted an allocation of 131 longer semis, the most of any operator, is running 25.

Last December, the DfT wrote to trial participants warning them that they have until December 2013 to use their allocation before it is reallocated to others (CM3 January).

• See our investigation (page 16) for more on the first anniversary of the trial.