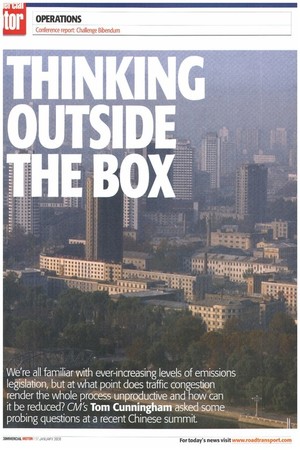 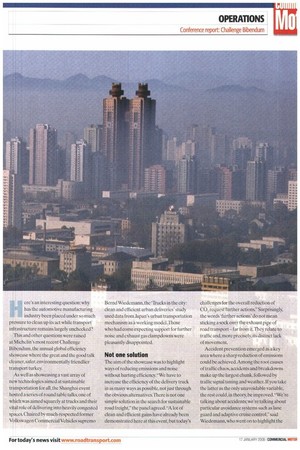 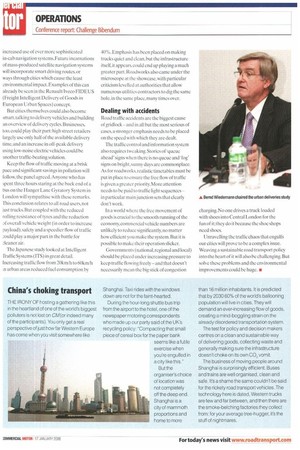 ere's an interesting question: why has the automotive manufacturing industry been placed under so much e to clean up its act while transport inftastructure remains largely unchecked?

'1.1-1is and other questions were raised atMichelin's most recent Challenge Bibendutn, the annual global efficiency sbOwcase where the great and the good talk die trier, safer, environmentally friendlier transport turkey.

As well as showcasing a vast array of new technologies aimed at sustainable transportation for all, the Shanghai event hosted a series of round table talks, one of which was aimed squarely at trucks and their vital role of delivering into heavily congested spaces. Chaired by much-respected former Volkswagen Commercial Vehicles supremo Bernd Wiedemann, the "Bucks in the city: clean and efficient urban deliveries' study used data from Japan's urban transportation mechanism as a working model.Those who had come expecting support for further noise and exhaust gas clampdowns were pleasantly disappointed.

Not one solution The aim of the showcase was to highlight ways of reducing emissions and noise without hurting efficiency "Wc have to increase the efficiency of the delivery truck in as many-ways as possible, not just through the obvious alternatives.There is not one simple solution in the search for sustainable road freight," the panel agreed."A lot of clean and efficient gains have already been demonstrated here at this event, but today's challenges for the overall reduction of CO2 request further actions." Surprisingly, the words 'further actions' do not mean sticking a sock over the exhaust pipe of road transport —far from it:They relate to traffic and, more precisely, its distinct lack of movement.

Accident prevention emerged as a key area where a sharp reduction of emissions could be achieved. Among the root causes of traffic chaos, accidents and breakdowns make up the largest chunk, followed by traffic signal timing and weather. If you take the latter as the only unavoidable variable, the rest could, in theory, be improved. "We're talking about accidents; we're talking about particular avoidance systems such as lane guard and adaptive cruise control," said Wiedema rtn,wh o went on to highlight the increased use of ever more sophisticated in-cab navigation systems. Future incarnations of mass-produced satellite navigation systems will incorporate smart driving routes, or ways through cities which cause the least environmental impact. Examples of this can already be seen in the Renault/Iveco FIDEUS (Freight Intelligent Delivery of Goods in European Urban Spaces) concept.

But cities themselves could also become smart. talking to delivery vehicles and building an overview of delivery cycles. Businesses, too, could play their part: high street retailers largely use only half of the available delivery time, and an increase in off-peak delivery using low-noise electric vehicles could be another traffic-beating solution.

Keep the flow of traffic moving at a brisk pace and significant savings in pollution will Follow, the panel agreed.Anyone who has spent three hours staring at the back end of a bus on the Hanger Lane Gyratory System in London will sympathise with these remarks, This conclusion relates to all road users, not just trucks. But coupled with the reduced rolling resistance of tyres and the reduction of overall vehicle weight (in order to increase payload), safety and a speedier flow of traffic :ould play a major part in the battle for :leaner air.

The Japanese study looked at Intelligent Traffic Systems (ITS) in great detail, Increasing traffic flow from 20kin/h to 60km/h in urban areas reduced fuel consumption by 40%. Emphasis has been placed on making trucks quiet and clean, but the infrastructure itself, it appears. could end up playing a much greater part. Roadworks also came under the microscope at the showcase, with particular criticism levelled at authorities that allow numerous utilities contractors to dig the same hole, in the same place, many times over.

Road traffic accidents are the biggest cause of gridlock —and in all but the most serious of cases, a stronger emphasis needs robe placed on the speed with which they are dealt.

The traffic con trol and information system also requires tweaking. Stories of 'queue ahead' signs when there is no queue and log' signs on bright, sunny days are commonplace. As for roadworks, realistic timetables must be put in place to ensure the free flow of traffic is given a greater priority More attention needs to be paid to traffic light sequences— in particular main junction sets that clearly don't work.

In a world where the free movement of goods is crucial to the smooth running of the economy, commercial vehicle numbers are unlikely to reduce significantly, no matter how efficient you make the system. But it is possible to make their operation slicker.

Governments ( national, regional and local) should be placed under increasing pressure to keep traffic flowing freely—and that doesn't necessarily mean the big stick of congestion charging. No one drives a truck loaded with shoes into Central. London for the fun of it;they do it because the shoe shops need shoes.

Unravelling the traffic chaos that engulfs our cities will prove to be a complex issue. Weaving a sustainable road transport policy into the heart of it will also be challenging. But solve these problems and the environmental improvements could be huge. •