Over to the professionals 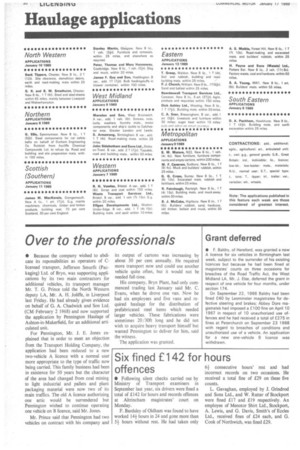 Page 32, 17th January 1969 — Over to the professionals
Close
Noticed an error?
If you've noticed an error in this article please click here to report it so we can fix it.
Keywords : Articulated Vehicle, Vehicles, Business / Finance

• Because the company wished to abdicate its reponsibilities as operators of Clicensed transport, Jefferson Smurfit (Packaging) Ltd. of Bryn, was supporting applications by its two main contractors for additional vehicles, its transport manager Mr. T. G. Prince told the North Western deputy LA, Mr. A. H. Joliffe, in Liverpool last Friday. He had already given evidence on behalf of G. A. Chadwick and Son Ltd. (CMFebruary 2 1968) and now supported the application by Pennington Haulage of Ashton-in-Makerfield, for an additional articulated unit.

For Pennington, Mr. J. E. Jones explained that in order to meet an objection from the Transport Holding Company, the application had been reduced to a new two-vehicle A licence with a normal user more appropriate to the type of traffic now being carried. This family business had been in existence for 50 years but the character of the area had changed from coal mining to light industrial and pallets and plant packaging material were now two of its main traffics. The old A licence authorizing one artic would be surrendered but Pennington wished to continue operating one vehicle on B licence, said Mr. Jones.

Mr. Prince said that Pennington had two vehicles on contract with his company and its output of cartons was increasing by about 30 per cent annually. He required more transport now and could use another vehicle quite .often, but it would not be needed full-time.

His company, Bryn Plant, had only commenced trading last January said Mr. C. Evans, when he drove one van. Now he had six employees and five vans and required haulage for the distribution of prefabricated steel items which needed larger vehicles. These fabrications were sometimes 20 /30ft long and he did not wish to acquire heavy transport himself but wanted Pennington to deliver for him, said the witness.