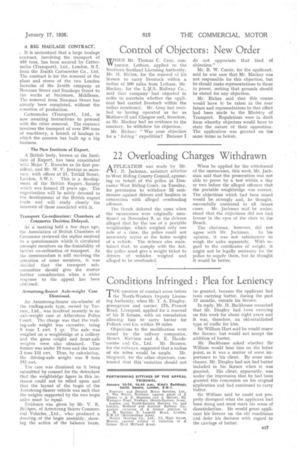 Page 31, 17th January 1936 — Conditions Infringed : Plea for Leniency
Close
Noticed an error?
If you've noticed an error in this article please click here to report it so we can fix it.
Keywords : Backhouse, Butter, Dingley

THE question of conduct arose before the North-Western Deputy Licensing Authority, when Mr. T. A. Dingley, greengrocer and carrier, 178, .Prescot Road, Liverpool, applied for a renewal of his B licence, with an emendation allowing him to carry butter for Pollock and Co. within 10 miles.

Objections to the modification were raised by the railway companies, Messrs. Karriers and A. E. Hands ' combe arid Co., Ltd. Mr. Beames, for the railways, suggested that a radius

of six miles would be ample. Mr. Shepherd, for the other objectors, contended that this "variation should not

be granted, because the applicant had been carrying butter, during the past 12 months, outside his licence.

In reply, Mr. II. Backhouse remarked that Mr. Dingley had been carrying on this work for about eight years and it was, therefore, an old-established type of traffic for him.

Sir William Hart said he would renew the licence, but would not accept the addition of butter.

Mr. Backhouse asked whether Sir William would hear him on the latter point, aS it was a. matter of some importance to his client. By some mischance. Mr. Dingley had not had butter included in his licence when it was granted. His client, apparently, was under the impression that he had been granted this concession on his original application and had continued to carry butter.

Sir William said he could not properly disregard what the applicant had been doing and must mark his sense of dissatisfaction. He would grant applicant his licence on the old conditions and defer his decision with regard to the carriage of butter.