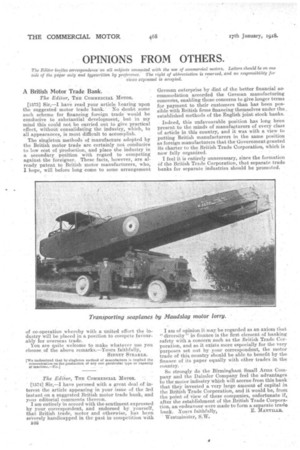 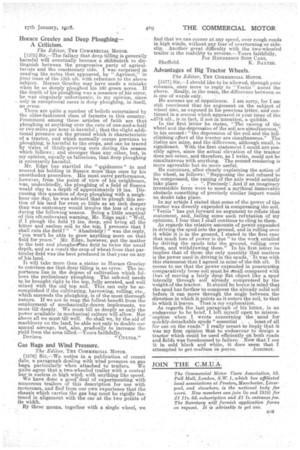 Page 20, 17th January 1918 — OPINIONS FROM OTHERS.
Close
Noticed an error?
If you've noticed an error in this article please click here to report it so we can fix it.
Keywords : Agricultural Machinery, Plough, Tractor, Tillage, Agriculture, Harrow

A British Motor Trade Bank. — The Editor, TEE COMMERCIAL Mown. • [1573] Sir,—I have read your article bearing upon the suggestedmotor trade -bank.' No doubt some such scheme for financing foreign trade would be conducive to substantial development; . but in my mind this could not be carried. out to give practical effect, vritliout consolidating the industry, which, to all appearances, is most difficult to accomplish.

The Singleton methods of manufacture adopted by the British motor trade are certainly not .conducive to low east of Production, and place the industry in a secondary position with regard to competing against the foreigner. These facts, however, are already patent to British motor manufacturers, who, I hope, will before long come to some arrangement of co-operation whereby with a united effort the industry will besplaced in a position to compete favourably for overseas trade.

• You are quite welcome to make whatever use you choose of the above remarks.—Yours faithfully,

[we understand that by singleton method of manufacture is implied the concentration on the production of any one particular type or capacity of machine.—En.] The Editor, THE COMMERCIAL MOTOR.

[15741 Sir,—I have perused with a great deal of interest the article appearing in your issue of the 3rd instant on a suggested British motor trade bank, and yout editorial comments thereon.

I am entirely in accord with the sentiment expressed by your correspondent, and endorsed by yourself, that British trade, motor and otherwise, has been severely handicapped in the past in competition with

B46 German enterprise by dint of the better financial aco commodation accorded the German manufacturing concerns, enabling those concerns to give longer terms for payment to their customers than has been possible with British firms financing themselves under the.. established methods of the English joint stock banks.

Indeed, this unfavourable position has long been present to the minds of manufacturers of every class of article in this country, and it was with a view to putting British manufacturers in the same position as foreign manufacturers that the Government granted its charter to the British Trade Corporation, which is now fully organized.

I feel it is entirely unnecessary, since the formation Of the British Trade Corporation, that separate trade banks for separate industries should be promoted.

I am of opinion it may be regarded as an axiom that " diversity " in finance is the first element of banking safety with a concern such as the British Trade Corporation, and as it exists more especially for the very purposes set out by your correspondent, the motor trade of thia.country should be able to benefit by the finance of its paper equally with other trades in the country. . • .

So strongly do the Birmingham Small Arms Company and the Daimler Company feel the advantages to the motor industry which will accrue from this bank that they invested a very large amount 9f capital in the British Trade Corporation, and it would be, from the point of view of these companies, unfortunate if, after the establishment of the British Trade Corporation, an endeavour were made to form a separate trade bank. Yours faithfully, E. MANVILLE. Westminster, S.W.

[1575] Sir,—The fallacy that deep tilling is generally harmful will eventually become a shibboleth to distinguish between the progressive party of agriculturists and the reactionary side. I was surprised in eeadeng the notes that appeared, by " Agrunot," in your issue of the 13th ult. with reference to the above subject. Horace Greeley may have made a mistake when he so deeply ploughed his 160 green acres. If the depth of his ploughing was a measure of his error, he was singularly unfortunate, in my opinion, since only in exceptional cases is deep ploughing, in itself, an. error.

There are quite a number of beliefs entertained by the older-fashioned class of farme'rs in this country. Prominent among these articles of faith are that ploughing at anything over the rate of one-and-a-half i

or two miles per hour s harmful ; that the slight additional pressure on the ground which is characteristic of a tractor, and which normally occurs previous to ploughing, is harmful to the crops, and can be traced by wales of thinly-growing corn during the season which follows ; and stronger than any other, but, in my opinion, equally as. fallacious, that deep ploughing is necessarily harmful. • Mr. Edge has startled the " quidnuncs " in and around his holding in Sussex more' than once by his unorthodox procedure. His most outré performance, however., from the point of view of his neighbours, was., undoubtedly, the ploughing of a field of Sussex weald clay to a. depth of 'approximately 12 ins. Discussing this question of deep ploughing with a neighbour one day, he was advised that to plough this section of his land for even so little as an inch deeper than was customary would involve the loss of a crop during the following'season. Being a little sceptical of this oft-reiterated warning, Mr. Edge said : "Well, if I plough the field 12 ins. deep e and bring all the bitter and useless soil to the top, I presume that I shall ruin the field?" "Absolutely F" was the reply, "you won't be able to grow anything more on that field for years." Mr. Edge. however' put the matter to the test and plougheciPtee field to twice the usual depth, and as a result the crop of wheat from that particular field was the best produced in that year on any of his land.

It will take more than a statue to Horace Greeleyto convince me that deep tilling is an error. The urnPartance lies in the degree of cultivation which follows the preliminary ploughing. The sub-soil needs to, be brought right to the top, fully aerated, and well mixed with the old top soil. This can only be accomplished if the cultivating, harrowing, rolling, etc., which succeeds the plonghing, is of the most thorough nature. If we are to reap the fullest benefit from the employment of mechanically-drawn implements, we must till-deeply. We must till as deeply as only the power available in mechanical culture will allow. But above all we must till well. So shall we, by the aid of machinery on the land, be able not only to double our annual acreage, but, also, gradually to increase the yield from the area tilled.—Yours faithfully,

[1576] Sir,—We notice in a publication of recent date, a paragraph dealing with wind pressure on gas bag, particularly when attached to trailers. We quite agree that a two-wheeled trailer with a central bar is useless in high wind', with anything like speed.

We have done a good deal of experimenting with numerous trailers of this description for use with motorcars and find from our own experience that the chassis which carries the ges bag must be rigidly fastened in alignment with the car at the two points of its width. By these means. together with a single wheel, we find that We can corner at any speed, over rough roads in high winds, without any fear of overturning or sideslip. Another great difficulty with the two-wheeled trailer is the inability to reverse.—Yours faithfully, For HENDERSON SIDE CARS, .

[157.7] Sir,—I should like to be allowed, through your columns, once more to reply to " Vectis " anent the above. Really, in the main, the difference between us

is one of words only.

He accuses me of impatience. I am sorry, for I am still convinced that his argument on the subject of wheel size, as exposed in his previous letter, and continued in a second which appeared in your issue of the –27th ult., is in fact, if not in intention, a quibble. In. the first "letter he states, "The raising of the wheel and the depression of the soil are simultaneous," in his second : "the depression of the Roil and the hillclimbing effort of the tractor are simultaneous." The italics are mine, and the difference, although small, is signifieaxib. With the first statement I could not possibly agree, since the actual elevation of the tractor does net occur, and therefore, as I write, could not be simultaneous with anything. The second rendering is more agreeable but no more useful.

He continues, after clearly explaining the action of the wheel, as follows : "Supposing the soil refused to be compressed, the raising of the axle would actually take place . . ". Precisely! And if an imaginary irresistible force were to meet a. mythical immovable obstacle something of precisely similar import would no doubt take place.

In my article I stated that someof the power of the trector was directly expended in compressing the soil. " Vectis " has put forward no argument to refute that statement, and, failing some such refutation of my opinions, I fear that I shall continue to cling to them. As regards the relative amounts of power 6xpended in driving the spud into the ground, and ià rolling over it while it is in the ground, I stated in the first case that much loss of power is due "to the work entailed by driving the spuds into the ground, rolling over them, and withdrawing them.' In his first letter he implies that of these the only quantity that matters is the power used in driving in. the spuds. It was with this statement that-I agreed in mine of the 6th ult. It seems to me that the power expended in penetrating comparatively loose soil must be mall compared with that of moving a fairly deep flat object like a spud laterally through soil already compressed by the weight of the tractor. It should be borne in mind that the spud has further to compress the already solid soil before it can move through the angle between the direction in which it points as it enters the soil, to that in which it leaves. That is my explanation.

As regards the last paragraph of his letter, in an endeavour to be brief. I left myself open to miscon e

ception when I wrote concerning the need for quickly-detachable spuds "essential . . least of all for use on the roads." I really meant to imply that it was my firm opinion that to endeavour to design a tractor which could be used efficiently on both roads and fields was foredoomed to failure. Now that I see it in cold black and white, it does seem that I attempted to get multurn in parvo. AGRIMOT.