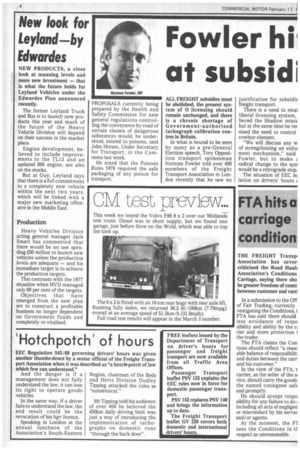 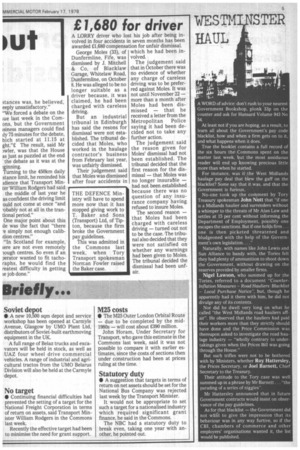 PROPOSALS currently being prepared by the Health and Safety Commission for new general regulations controlling the conveyance by road of certain classes of dangerous substances would, he understood, extend to poisons, said John Horam, Under Secretary for Transport, in the Commons last week.

He noted that the Poisons Rules 1978 required the safe packaging of any poison for transport. ALL FREIGHT subsidies must be abolished, the present system of 0 licensing should remain unchanged, and there is a chronic shortage of Government-authorised tachograph calibration centres in Britain.

In what is bound to be seen by many as a pre-General Election speech, Tory Opposition transport spokesman Norman Fowler told over 400 members of the Freight Transport Association in London recently that he saw no justification for subsidis. freight transport.

There is a need to retai liberal licensing system, lieved the Shadow minis but at the same time he rec nised the need to control cowboy element.

"We will discuss any w of strengthening an enfol ment mechanism," said Fowler, but to make k radical change to the syst would be a retrograde step.

The situation of EEC lel lation on drivers' hours stances was, he believed, eeply unsatisfactory."

"We forced a debate on the iue last week in the Cornons, but the Government isiness managers could find ily 75 minutes for the debate, hich started at 11.15 at ght."£ The result, said Mr )wler, was that the House as just as puzzled at the end the debate as it was at the Tinning.

Turning to the 450km daily stance limit, he reminded his idience that Transport Minter William Rodgers had said the middle of last year he as confident the driving limit ould not come at once "and -obably not at all in the trantional period."

One major point about this tie was the fact that "there -e simply not enough calibition centres."

"In Scotland for example, iere are not even remotely lough centres. So even if an perator wanted to fit tachoraphs, he would find the reatest difficulty in getting le job done."