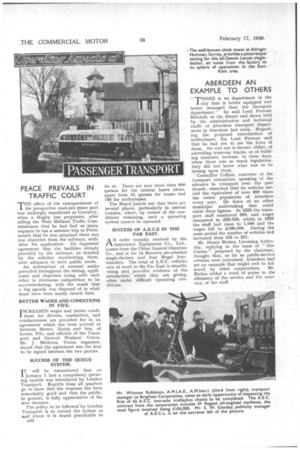 • PT-HE effect of the announcement of 1 the prospective road-rail peace pact was strikingly manifested at Coventry, when a Rugby bus proprietor, after telling the West Midland Traffic Commissioners that he had had so many requests to run a summer trip to Portsmouth that he was surprised there was any objection from the railways, with: drew his application. He expressed agreement that the facilities already provided by the railways, as detailed by the solicitor representing them, were adequate to meet public needs. An atmosphere of unusual amity prevailed throughout the sitting, applicants and objectors vying with each other in strenuous competition to be accommodating, with the result that a big agenda was disposed of in whaCt must have been nearly record time.

BETTER WAGES AND CONDITIONS IN FIFE.

INCREASED wages and better condi'. tions for drivers, conductors, and conductresses are provided for in an agreement which has been arrived at between Messrs. Harris and Son, of Leven, Fife, and officials of the Transport and General Workers' Union. Mr. J. Methven, Union organizer, stated that the agreement was the first to be signed between the two parties.

SUCCESS OF THE QUEUE SYSTEM.

I T will be remembered that on January 1 last a compulsory queueing system was introduced by London Transport. Reports from all quarters go to show that the response has been remarkably good and that the public, in general, is fully appreciative of the new measure.

do so. There are now more than 600 queues for the central buses alone, apart from 51 queues for trams and 145 for trolleybuses.

The Board points out that there are several places, particularly in central London, where, by reason of the conditions obtaining, such a queueing System cannot be operated.

SUCCESS OF A.E.C.S IN THE FAR EAST.

AN order recently received by the Associated Equipment Co., Ltd., comes from the China General Omnibus Co., and is for 14 Renown six-wheeled single-deckers and four Regal four'wheelers. The total of A.E.C. vehicles now at work in the Far East is steadily rising and provides evidence of the satisfaction which they are giving, often under difficult operating conditions.

ABERDEEN AN EXAMPLE TO OTHERS

" THERE is no department in the & city that is better equipped and better managed than the transport department." So said Lord Provost Mitchell, at the dinner and dance held by the administrative and technical staffs of Aberdeen transport department in Aberdeen last week. Regarding the proposed introduction of trolleybuses, the Lord Provost said that he had yet to see the force of them. He was not in favour, either, of extending tramway tracks, or of building tramcars, because, in these days, when there was so much legislation, they did not know what was to be sprung upon them.

Councillor Collins, convener of the transport committee, speaking of the advance in transport over the past decade, remarked that its vehicles carried the equivalent of over 400 times the entire population of Aberdeen every year. He knew of no other municipal undertaking that could claim these figures. In 1928 the transport staff numbered 600, and wages amounted to £95,000, whilst in 1938 the staff had risen to 1,000 and the wages bill to £160,000. During the same period the number of vehicles had increased from 158 to 221.

Mr. Henry Riches, Licensing Authority, replying to the toast of " Our Guests," proposed by the chairman, thought that, so far as public-service vehicles were concerned, Aberdeen had set an example that might well be followed by other corporations. Mr. Riches added a word of praise to the efficiency of the service and the courtesy of the staff.