LAST SUNDAY we presented Tom Curran of Roadline with the 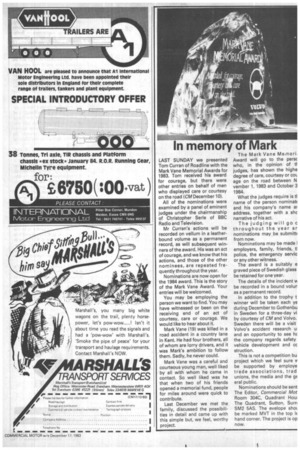 Page 49, 17th December 1983 — LAST SUNDAY we presented Tom Curran of Roadline with the
Close
Noticed an error?
If you've noticed an error in this article please click here to report it so we can fix it.
Keywords : Measuring Instruments, Quadrant, Surveying, Vane, T.i., Volvo, Human Interest

Mark Vane Memorial Awards for 1983. Tom received his award for courage, but there were other entries on behalf of men who displayed care or courtesy on the road {CM December 10).

All of the nominations were examined by a panel of eminent judges under the chairmanship of Christopher Serle of BBC Radio and Television.

Mr Curran's actions will be recorded on vellum in a leatherbound volume as a permanent record, as will subsequent winners of the award. His was an act of courage, and we know that his actions, and those of the other nominees, are repeated frequently throughout the year.

Nominations are now open for the 1984 award. This is the story of the Mark Vane Award. Your entries will be welcomed.

You may be employing the person we want to find. You may have witnessed or been on the receiving end of an act of courtesy, care or courage. We would like to hear about it.

Mark Vane (19) was killed in a road accident in a country lane in Kent. He had four brothers, all of whom are lorry drivers, and it was Mark's ambition to follow them. Sadly, he never could.

Last December we met the family, discussed the possibilities in detail and came up with this simple but, we feel, worthy project. The Mark Vane Mecnori. Award will go to the persc who, in the opinion of ti judges, has shown the highe degree of care, courtesy or coL age on the road between N vember 1, 1983 and October 3 1984.

What the judges require is ti name of the person nominat( and his company's name at address, together with a shc narrative of his act.

The judging will go c throughout the year ar nominations may .be submith from now.

Nominations may be made I employers, family, friends, ti police, the emergency servic or any other witness.

The award is a suitably e graved piece of Swedish glass be retained for one year.

The details of the incident vs be recorded in a bound volur as a permanent record.

In addition to the trophy t winner will be taken each ye during December to Gothenbu in Sweden for a three-day vi by courtesy of CM and Volvo. Sweden there will be a visit Volvo's accident research u and an opportunity to see hc the company regards safety vehicle development and cc struction.

This is not a competition bu project which we feel sure v be supported by employe trade associations, trad unions, the media and the ge eral public.

Nominations should be sent The Editor, Commercial Mot Room 304C, Quadrant How The Quadrant, Sutton, Surri SM2 5AS. The evelope shot be marked MVT in the top If hand corner. The project is op now.