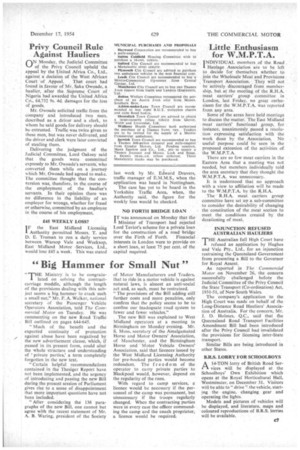 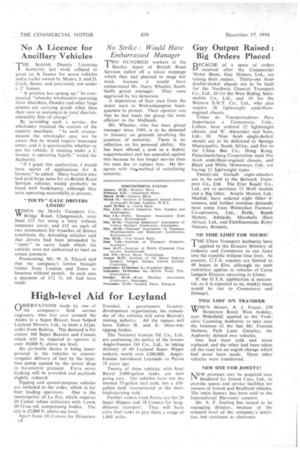 Page 45, 17th December 1954 — Little Enthusiasm for W.M.P.T.A.
Close
Noticed an error?
If you've noticed an error in this article please click here to report it so we can fix it.
Keywords : G, Jowett

INDIVIDUAL members of the Road Haulage Association are to be left to decide for themselves whether to join the Wholesale Meat and Provisions Transport Association. They will not be actively discouraged from membership, but at the meeting of the R.H.A. meat carriers' group committee in London, fast Friday, no great enthusiasm for the W.M.P.T.A. was repor(ed from any area.

Some of the areas have held meetings to discuss the matter. The East Midland meat carriers' functional group, for instance, unanimously passed a resolution expressing satisfaction with the work done by the Association. No useful purpose could be seen in the proposed extension of the activities of the W.lvI.P.T.A.

There are so few meat carriers in the Eastern Area that a meeting was not needed, but members individually told the area secretary that they thought the W.M.P.T.A. was unnecessary.

It is understood that no approach with a view to affiliation will be made to the W.M.P.T.A. by the R.H.A.

The R.H.A. meat carriers group committee have set up a sub-committee to consider the desirability of changing the constitution of the meat section to meet the conditions created by the dcrationing of meat,

INJUNCTION REFUSED AUSTRALIAN HAULIERS THE Australian full High Court have refused an application by Hughes and Vale Pty., Ltd., for an injunction restraining the Queensland Government from presenting a Bill to the Governor for Royal Assent.

As reported in The Commercial Motor on November 26, the concern successfully challenged before the Judicial Committee of the Privy Council the State Transport (Co-ordination) Act, 1931-51, of New South Wales.

The company's application to the High Court was made on behalf of the Long-Distance Road Hauliers' Association of Australia. For the concern, Mr. I. D. Holmes, Q.C., said that the Queensland Road Transport Facilities Amendment Bill had been introduced after the Privy Council had invalidated the provisions for licensing inter-State transport.

Similar Bills are being introduced in other States.

vices will be displayed at the Schoolboys' Own Exhibition which opens at the Royal Horticultural Hall, Westminster, on December 31. Visitors will be able to" drive" the vehicle, starting the engine, changing gear and operating the lights.

Models and pictures of vehicles will be displayed, and literature, maps and coloured reproductions of B.R.S. lorries will be available.

No A Licenee for Ancillary Vehicles

THE Scottish Deputy Licensing Authority last week refused to grant an A licence for seven vehicles and a trailer owned by Messrs. J. and a Craik. Scone, and previously run under

"A practice has sprung up,' he commented, "whereby wholesalers operating from Aberdeen, Dundee and other large centres are carrying goods other than their own to customers in rural districts, ostensibly free Of charge." By providing such a service, the wholesaler retained the custom of the country merchant. " In such circumstances the wholesaler may not be aware that he would require insurance cover, and it is questionable whether or not his vehicle, if running under a C licence, is operating legally." stated the Authority. •

If I grant this application, I would have scores of applications for A licences," he added. Many hauliers who had paid large sums for ex-British Road Services .vehicles would probably be faced with bankruptcy, although they were operating successfully at present.

WHEN the Morfa Transport Co., W Bridge Road, Llangennech, were fined 125 for using a lorry without insurance cover, and £15 on each of two summonses for,breaches of licence conditions, the defending solicitor said that drivers had been persuaded by "

touts" to .carry loads which the vehicles were not authorized to haul on return journeys.

Prosecuting, Mr. W. S. Tilyard said that the company's lorries brought timber from London. and Essex to Swansea without permit. In each case a payment of £12 7s. 6d. had been made.

No Strike.' Would Have Embarrassed Manager

HUNDRED workers at the 1V3entleydepot of British Road Services called off a token stoppage which they had planned to stage last week, because it would have embarrassed Mr. Harry Wheeler. South Staffs group manager. They were aggrieved by his demotion. A deputation of four men from the depot went to Wolverhampton headquarters to protest. Their opinion was that he had made the group the most efficient in the Midlands. Mr. Wheeler, who has been group manager since 1949. is to be demoted in January on grounds involving the question of seniority. There is no reflection on his personal ability. He has been offered a post as a deputy superintendent and has appealed against this because he has longer service than the man due to replace him. He disagrees with the. method of calculating seniority.

NO TIME LIMIT FOR TOURS?

THE Ulster Transport Authority have applied to the Eireann Ministry of Industry and Commerce to run tours into the republic without time limit. At present, U.T.A. coaches are limited to 48 hours in Eire, although no such restriction applies to vehicles of Coras lompair Eireann operating in Ulster.

If the U.T.A. application is successful, as it is expected to be, weekly tours would be run to Connemara and Donegal.

WHEN Messrs. A. J. Fraser. 339 Westerton Road, West Ardsley, near Wakefield. applied to the Yorkshire Licensing Authority to take over the business of the late Mr. Fawcett Hobson. Park Lane, Guiseley, the Authority deleted two vehicles. One had been sold and never replaced, and the other had been taken off the road far an engine change which had never been made. Three other vehicles were transferred.

NEwpremises may be acquired near Bradford by Jowett Cars, Ltd., to provide spares and service facilities for owners of Jowett and Bradford vehicles. The main factory has been sold to the International Harvester concern. Mr. A. F. Jopling has ceased to be managing director, . because of the reduced level of the company's activities, but continues as chairman.