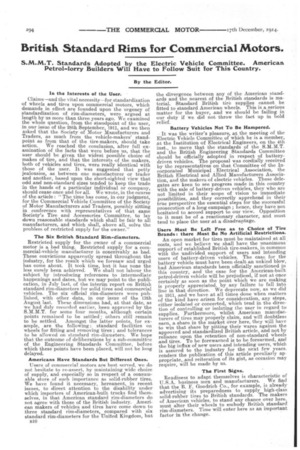 Page 16, 17th December 1914 — British Standard Rims for Commercial Motors.
Close
Noticed an error?
If you've noticed an error in this article please click here to report it so we can fix it.

S.M.M.T. Standards Adopted by the Electric Vehicle Committee. American Petrol-lorry Builders Will Have to Follow Suit for This Country.

In the Interests of the User.

Claims—and the vital necessity—for standardization of wheels and tires upon commercial motors, which demands in effect are founded upon the urgency of standardization of rim-diameters, were argued at length by us more than three years ago. We examined the whole question, from the standpoint of the user, in our issue of the 28th September, 1911, and we then asked that the Society of Motor Manufacturers and Traders, as much from the vehicle-makers' standpoint as from that of the tire-makers, should take action. We reached the conclusion, after full examination of the facts that were before us, that the user should be given the widest possible choice of makes of tire, and that the interests of the makers, both of vehicles and tires, were really identical with those of the user. It was suggested that petty jealousies, as between one manufacturer or trader and another, based upon the short-sighted view that odd and non-standard sizes tended to keep the trade in the hands of a particular individual or company, should cease once and for all. We wrote, in the course of the article "The time has come, in our judgment, for the Commercial Vehicle Committee of the Society of Motor Manufacturers and Traders, possibly sitting in conference with representatives of that same Society's Tire and Accessories Committee, to lay down reasonable standards which shall be fair to all manufacturers, and which shall, above all, solve the problem of restricted supply for the owner."

Restricted supply for the owner of a commercial motor is a bad thing. Restricted supply for a commercial-vehicle manufacturer is conceivably as bad. These convictions apparently spread throughout the industry, for the result which we foresaw and urged has come about. It took time, but it has none the less surely been achieved. We shall not labour the subject by introducing references to intermediate happenings and dates, but we may point to the publication, in July last, of the interim report on British standard rim-diameters for solid tires and commercial vehicles. The six official rim-diameters wore published, with other data, in our issue of the 13th August last. These dimensions had, at that date, as we had duly recorded earlier, been approved by the S.M.M.T. for some four months, although certain points remained to be settled ; others still remain to be settled. Amongst. the latter points, for example, are the following standard facilities on wheels for fitting and removing tires ; and tolerances to be allowed on standard rim-diameters. We hope that the outcome of deliberations by a sub-committee of the Engineering Standards Committee, before which these points have been placed, will not be long delayed.

Americans Have Standards But Different Ones.

Users of commercial motors are best served, we do not hesitate to re-assert, by maintaining wide choice of supply, and especially so in respect of a consumable store of such importance as solid-rubber tires. We have found it necessary, hereanent, in recent issues, to direct attention to the disability under which importers of American-built trucks find themselves, in that American standard rim-diameters do not agree with those of the British industry. American makers of vehicles and tires have come down to three standard rim-diameters, compared with six standard rim-diameters for the United Kingdom, but B10 the divergence between any of the American standards and the nearest of the British standards is material. Standard British tire supplies cannot be fitted to standard American wheels. This is a serious matter for the buyer, and we should be failing in our duty if we did not throw the fact up in bold relief.

Battery Vehicles Not To Be Hampered.

It was the writer's pleasure at the meeting of the Electric Vehicle Committee of which he is a member, at the Institution of Electrical Engineers, on the 4th inst., to move that the standards of the S.M.M.T. and the British Engineering Standards Committee should be officially adopted in respect of batterydriven vehicles. The proposal was cordially received by the representatives on that Committee of the Incorporated Municipal . Electrical Association, the British Electrical and Allied Manufacturers Association, and the makers of electric vehicles. These delegates are keen to see progress made in this country with the sale of battery-driven vehicles, they who are not limited in their scope of vision to immediate possibilities, and they correctly apprehend in their true perspective the essential steps for the successful prosecution of a long campaign ; hence, they have not hesitated to accord support to our view. Opposition to it must be of a reactionary character, and must tend to place the user at a disadvantage.

Users Must Be Left Free as to Choice of Tire Brands: there Must Be No Artificial Restrictions.

An open market for tires must be maintained at all costs, and we believe, we shall have the unanimous support of established British tire-makers, in common with the undivided support of users and intending users of battery-driven vehicles. The case for the battery vehicle must have been dealt an unkind blow, had American standards been officially sanctioned in this country, and the case for the American-built petrol-driven vehicle will be prejudiced, if not at once certainly as soon as the point which we are making is properly appreciated. by any failure to fall into line in that direction. We deprecate now, as we did in 1911, and we have at all times done when matters of the kind have arisen for consideration, any steps, either isolated or concerted, which tend in the direction of controlling or isolating the user in regard to supplies. Furthermore, whilst American manufacturers of tires may properly claim, and will doubtless earn,. a share in the market over here, they will have to wen that share by pitting their wares against the approved and standardized British article, and not by reliance upon the retention of non-standard wheels and tires. To be forewarned is to be forearmed, and the big influx a new users and intending users, which is assured to the industry for the next few years, renders the publication of this article peculiarly appropriate, and reiteration of its gist, as occasion may require, will be made by us.

Readiness to adapt themselves is characteristic of U.S.A. business men and manufacturers. We find that the B. F. Goodrich Co., for example, is already advertising its preparedness to supply high-class solid-rubber tires to Britieh standards. The makers of American vehicles, to stand any chance over here. must alter their wheels to embody British standard rim-diameters. Time will enter here as an important factor in the change.