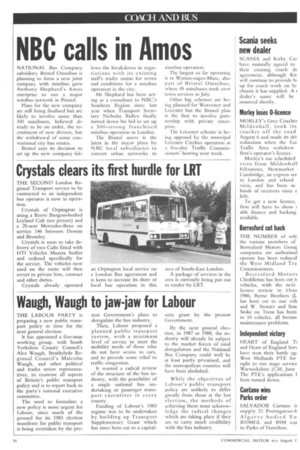 Plans for the new company are still being finalised but are likely to involve more than 100 minibuses, believed already to be on order, the recruitment of new drivers, but the withdrawal of some conventional city bus routes.

Bristol says its decision to set up the new company fol lows the breakdown in negotiations with its existing staffs trades union for terms and conditions for a minibus operation in the city.

Mr Shephard has been acting as a consultant to NBC's Southern Region since last year when Transport Secretary Nicholas Ridley finally turned down his bid to set up a 500-strong franchised minibus operation in London.

The Bristol move is the latest in the major plans by NBC local subsidiaries to convert urban networks to minibus operation.

The largest so far operating is in Weston-super-Mare, also part of Bristol Omnibus, where 45 minibuses took over town services in July.

Other big schemes are being planned for Worcester and Leicester but the Bristol plan is the first to involve partnership with private enterprise.

The Leicester scheme is being opposed by the muneipal Leicester Citybus operation at five-day Traffic Commissioners' bearing next week.