NBC SHAPES UP TO LOCAL GOVERNMENT 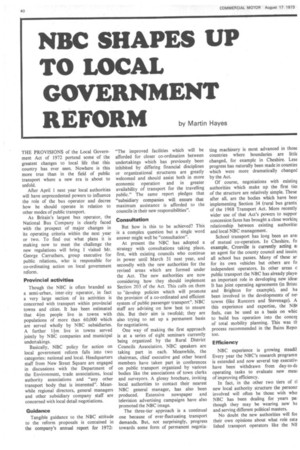 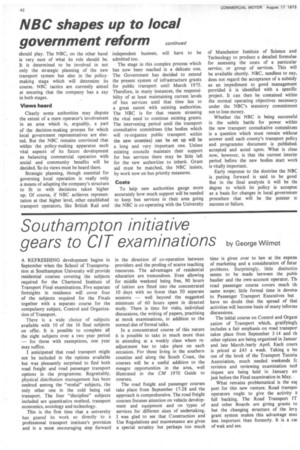 REFORM by Martin Hayes THE PROVISIONS of the Local Government Act of 1972 portend some of the greatest changes to local life that this country has ever seen. Nowhere is this more true than in the field of public transport where a new era is about to unfold.

After April 1 next year local authorities will have unprecedented powers to influence the role of the bus operator and decree how he should operate in relation to other modes of public transport.

As Britain's largest bus operator, the National Bus Company is clearly faced with the prospect of major changes in its operating criteria within the next year or two. To find out what plans it is making now to meet the challenge the new regulations will bring I visited Mr. George Carruthers, group executive for public relations, who is responsible for co-ordinating action on local government reform.

Provincial activities Though the NBC is often branded as a semi-urban, inter-city operator, in fact a very large section of its activities is concerned with transport within provincial towns and cities. It has been estimated that 44m people live in towns with populations of more than 60,000 which are served wholly by NBC subsidiaries. A further lim live in towns served jointly by NBC companies and municipal undertakings.

Basically, NBC policy for action on local government reform falls into two categories: national and local. Headquarters staff from New Street Square are engaged in discussions with the Department of the Environment, trade associations, local authority associations and "any other transport body that is interested". Meanwhile regional directors, general managers and other subsidiary company staff are concerned with local detail negotiations.

Guidance Tangible guidance to the NBC attitude to the reform proposals is contained in the company's annual report for 1972: "The improved facilities which will be afforded for closer co-ordination between undertakings which has previously been inhibited by differing financial disciplines or organizational structures are greatly welcomed and should assist both in more economic operation and in greater availability of transport for the travelling public." The same report pledges that "subsidiary companies will ensure that maximum assistance is afforded to the councils in their new responsibilities".

Consultation But how is this to be achieved? This is a complex question but a single word answer might well be "consultation".

At present the NBC has adopted a strategy with consultations taking place, first, with existing councils who continue in power until March 31 next year, and secondly with the new authorities for the revised areas which are formed under the Act. The new authorities are now considering how they should implement Section 203 of the Act. This calls on them to "develop policies which will promote the provision of a co-ordinated and efficient system of public passenger transport". NBC staff are advising on how best to ensure this. But their aim is twofold; they are also trying to set up a permanent basis for negotiations.

One way of making the first approach is at a series of eight seminars currently being organized by the Rural District Councils Association. NBC speakers are taking part in each. Meanwhile, the chairman, chief executive and other board members have taken part in conferences on public transport organized by various bodies like the associations of town clerks and surveyors. A glossy brochure, inviting local authorities to contact their nearest NBC general manager, has also been produced. Extensive newspaper and television advertising campaigns have also promoted the NBC image.

The three-tier approach is a continual one because of ever-fluctuating transport demands. But, not surprisingly, progress towards some form of permanent negotia

ting machinery is most advanced in those countries where boundaries are little changed, for example in Cheshire. Less progress has naturally been made in counties which were more dramatically changed by the Act.

Of course, negotiations with existing authorities which make up the first tiei of the structure are relatively simple. These after all, are the bodies which have beer implementing Section 34 (rural bus grants. of the 1968 Transport Act. More recently wider use of that Act's powers to suppor concession fares has brought a close workim relationship between existing authoritie: and local NBC management.

School transport has long been an are of mutual co-operation. In Cheshire, fo example, Crosville is currently acting a: an agent for the county council and issuin; all school bus passes. Many of these ar for its own vehicles but others are fo independent operators. In other areas public transport the NBC has already playe. an important role in developing new idea: It has joint operating agreements (in Briste and Brighton for example), and ha been involved in the developments of nel towns (like Runcorn and Stevenage). A this experience and expertise, the NBC feels, can be used as a basis on whic to build bus operation into the comer of total mobility planning. This was tit process recommended in the Bains Repo' too.

Efficiency NBC experience is growing steadil Every year the NBC's research programn is extended and now several top executivi have been withdrawn from day-to-dE operating tasks to evaluate new meai of improving efficiency.

In fact, in the other two tiers of t I new local authority structure the personn involved will often be those with who NBC has been dealing for years pa: though they may be wearing new ha and serving different political masters.

No doubt the new authorities will for their own opinions about what role esta lished transport operators like the NE should play. The NBC, on the other hand is very sure of what its role should be. It is determined to be involved in not only the strategic planning of the new transport system but also in the policymaking stage which will determine its course. NBC tactics are currently aimed at ensuring that the company has a say in both stages.

Views heard Clearly sonic authorities may dispute the extent of a mere operator's involvement in an area which is, arguably, a part of the decision-making process for which local government representatives are elected. But the NBC remains convinced that within the policy-making apparatus such vital aspects of its future development as balancing commercial operation with social and community benefits will be decided. So its views must be heard there.

Strategic planning, though essential for governing local operation is really only a means of adapting the company's structure to fit in with decisions taken higher up. Of course, if NBC achieves representation at that higher level, other established transport operators, like British Rail and independent busmen, will have to be admitted too.

The stage in this complex process which has now been reached is a delicate one. The Government has decided to extend the present system of infrastructure grants for public transport until March 1975. Therefore, in many instances, the responsibility of at least maintaining current levels of bus services until that time lies to a great extent with existing authorities. The NBC is for that reason stressing the vital need to continue existing grants. The intervening period until the transport consultative committees (the bodies which will re-organize public transport within the new counties) can be set up will be a long and very important one. Unless existing councils maintain their support for bus services there may be little left for the new authorities to inherit. Grant aid must be matched, the NBC insists, by work now on bus priority measures.

Costs To help new authorities gauge more accurately how much support will be needed to keep bus services in their area going the NBC is co-operating with the University of Manchester Institute of Science and Technology to produce a detailed formulae for assessing the costs of a particular service, or group of services. This will be available shortly. NBC, needless to say, does not regard the acceptance of a subsidy as an impediment to good management provided it is identified with a specific project. It can then be contained within the normal operating objectives necessary under the NBC's statutory commitment not to lose money.

Whether the NBC is being successful in the subtle battle for power within the new transport consultative committees is a question which must remain without answer until each county's transport policy and programme document is published. accepted and acted upon. What is clear now, however, is that the current interim period before the new bodies start work is vitally important.

Early response to the doctrine the NBC is putting forward is said to be good But in the final analysis it will be tilt degree to which its policy is acceptec as a basis for changes in local governmem procedure that will be the pointer tc success or failure.