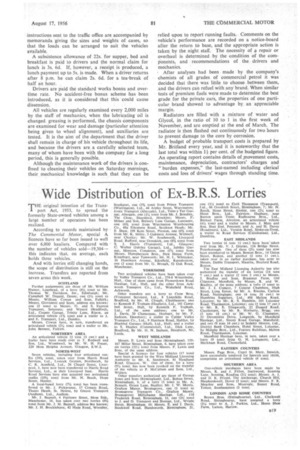 Page 53, 17th August 1956 — Wide Distribution of Ex-B.R.S. Lorries
Close
Noticed an error?
If you've noticed an error in this article please click here to report it so we can fix it.
Keywords : Vehicles, Articulated Vehicle, Truck, Technology, Mechanical Engineering

THE original intention of the Trans port Act, 1953, to spread the formerly State-owned vehicles among a large number of operators has been realized.

According to 'records maintained by The Commercial Motor, special A licences have so far been issued to well over 6,000 hauliers. Compared with ' the number of vehicles sold-19,304— this indicates that, on average, each holds three vehicles.

And with lorries still changing hands, the scope of distribution is still on the increase. Transfers are reported from seven areas this week.

Two articulated vehicles have been taken over by Valley Transport Co., Ltd., 254-8 Wincolmlee, Hull., One of them came from Flowerdown Road Haulage, Ltd., Hull, and the other from Ack. 'worth Transport Co., Ltd,, Wakefield Road, Ackworth.

EAST IVHDLANDS Two lorries (4 tons 12 cwt.) have been taken over from Mr. V. J. Grange, 124 Bridge Street. Peterborough. One of these (2% tons) has now been transferred to Messrs. Benton Bros., 14 Union Street, Boston, and another (2 tons 11 cwt.). taken over in an earlier purchase. has gone to Messrs. Dabbs Transport, Maurits., Sleaford Road, Boston.