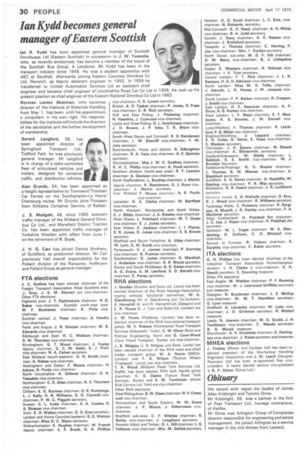 Ian R. Kydd has been appointed general manager of Scottish Omnibuses Ltd (Eastern Scottish) in succession to J. W. Tweedie, who, as recently annOunced, has become a member of the board of the Scottish Bus Group, A Londoner, Mr Kydd has been in the transport industry since 1948. He was a student apprentice with AEC at Southall, afterwards joining Eastern Counties Omnibus Co Ltd, Norwich, as deputy assistant engineer in 1953. In 1956 he transferred to United Automobile Services Ltd as assistant chief engineer and became chief engineer of Lincolnshire Road Car Co Ltd in 1958. He took up his present position as chief engineer of the Eastern National Omnibus Co Ltd in 1963.

Norman Lenton Akerman, who becomes director of the Institute of Materials Handling from May 1, has been, until his appointment, a consultant in his own right. His responsibilities for the Institute will include the direction of the secretariat and the further development of membership.

Gerard Langford, 38, has been appointed director of Springfield Transport Ltd., Trafford Park, he was previously general manager. Mr Langford is in charge of a radio-controlled fleet of articulated vehicles and trailers, designed for container traffic, and distributive vehicles.

Alan Grundy, 34, has been appointed as a freight representative by Townsend Thoresen Car Ferries on the Southampton-Le Havre/ Cherbourg routes. Mr Grundy joins Thoresen from Williams Container Service, of Belfast.

J. S. Madgett, 46. since 1965 assistant traffic manager of the Midland General Omnibus Co Ltd., and Mansfield District Traction Co, has been appointed traffic manager of Yorkshire Woollen with effect from June 1, on the retirement of R. Dunk.

J. H. G. Carr has joined Dennis Brothers, of Guildford, as production director. Mr Carr previously had overall responsibility for the Pollard division of the Ransome, Hoffmann and Pollard Group as general manager.

We record with regret the deaths of James Allan Kirkbright and Tommy Orme.

Mr Kirkbright, 59, was a partner in the firm of Peel Transport Ltd, haulage contractors, of Halifax.

Mr Orme was Arlington Group of Companies director responsible for engineering and estate management. He joined Arlington as a service manager in the mid-thirties from Leyland.