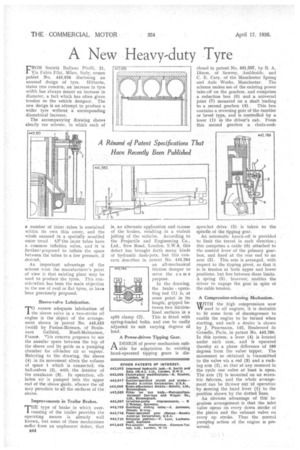 Page 58, 17th April 1936 — A New Heavy-duty Tyre
Close
Noticed an error?
If you've noticed an error in this article please click here to report it so we can fix it.
Keywords : Sleeve Valve, Valve

FROM Societa. Italiana Pirelli, 21, Via Fabio Filni, Milan, Italy, comes patent No. 443,878 disclosing an unusual design of tyre. Hitherto, States this concern, an increase in tyre width has always meant an increase in diameter, a fact which has often given troubie to the vehicle designer. The new design is an attempt to produce a wider tyre without a corresponding diametrical increase.

The accompanying drawing shows clearly rue scheme, in which each of

a number of inner tubes is contained within its own thin cover, and the whole encased in a specially moulded outer tread An the inner tubes have a common inflation valve, and it is further, proposed to inflate the space between the tubes to a low pressure, if desired.

An important advantage of the scheme from the manufacturer's point pf view is that existing plant may be used to produce the tyres. This consideration has been the main objection to the use of oval or flat tyres, as have been previously proposed.

ensure adequate lubrication of the sleeve valve in a two-stroke oil engine is the object of the arrangement shown in patent No. 443,553 (void) by Fusion-Moteurs, of Boule

vard Gallieni, Rueil-Malmaison, France. "his concern proposes to use the annular space between the top of the sleeve and its guide as a pumping chamber for oil-laden air or vapour. Referring to the drawing, the sleeve (4) in its movement alters the volume of space 1 whichis connected, via ball-,valves (2), with the interior of the crankcase (3). In operation, oilladen air is pumped into the upper end of the sleeve guide, Whence the oil may percolate to all the surfaces of the sleeve.

rr HE type of brake in which over1 running of the trailer provides the operating means is already well known, but some of these mechanisms suffer from an unpleasant defect, that B44 is, an alternate application and reiease of the 'brakes, resulting in a violent jolting of the vehicles. According to the Projectile and Engineering Co., Ltd., New Road, London, S.W.8, this defect has brought forth many kinds of hydraulic dash-pots, but this concern. describes in patent No. 443,784 an all-mechanical friction damper to serve the same purpose.

In the drawing, the brake operating rod (1) is, at some point in its length, gripped between two frictionlined surfaces in a split clamp (2). This is fitted with spring-loaded bolts, and can be easily adjusted to suit varying degrees of load.

/X DESIGN of power mechanism suit1-1. able for adaptation to existing hand-operated tipping gears is clis closed in patent No. 441,567, by B. A. Dixon, of Sawrey, Ambleside, and C. E. Cary. of the Manchester Spring and Axle Works, Manchester. The scheme makes use of the existing power take-off on the gearbox, and comprises a reduction box (8) and a universal joint (7) mounted on a shaft leading to a second gearbox (4). This box contains a reversing gear of the tumbler or bevel type, and is controlled by a lever (1) in the driver's cab. From this second gearbox a chain-and sprocket drive (3) is taken to the spindle of the tipping gear.

An automatic knock-off is provided to limit the travel in each direction ; this comprises a cable (6) attached to the control lever of the primary gearbox, and fixed at the rear end to an arm (2). This arm is arranged, with respect to the tipping pivot, so that it is in tension at both upper and lower positions, but free between these limits. A spring (5). however, enables the driver to engage the gear in spite of the cable tension.

WITH the high compressions now used in oil engines, it is desirable to fit some form of clecompressor to enable the engine to be turned when starting, and such a device is shown by J. Punrmann, 142, I3oulevard de Grenelle, 'Paris, in patent No. 943,780. In this system, a lever (4) is located under each cam, and is operated thereby at a phase difference of 180 degrees from the valve tappet. The movement so obtained is transmitted to the valve via a rod (3) and a rocking arm (2), so that at any moment in the cycle one valve at least is open. The arm (2) is mounted on an eccentric fulcrum, and the whole arrangement can be thrown out of operation by moving the hand lever (4 to the position shown by the dotted lines.

An obvious advantage of this ingenious arrangement is that the inlet valve opens on every down stroke of the piston and the exhaust valve on every up stroke. Thus the normal pumping action of the engine is preserved.