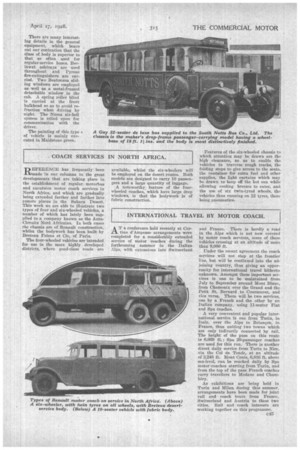 Page 67, 17th April 1928 — INTERNATIONAL TRAVEL BY MOTOR COACH.
Close
Noticed an error?
If you've noticed an error in this article please click here to report it so we can fix it.

A T a conference held recently at Cortino d'Ampezzo arrangements were completed for a considerably extended service of motor coaches during the forthcoming summer in the Italian Alps, with extensions into Switzerland and France. There is hardly a road in the Alps which is not now covered by motor coach services, some of these vehicles crossing at an altitude of more than 9,000 ft.

Under the recent agreement the coach services will not stop at the frontier line, but will be continued into the adjoining country, thus giving an opportunity for international travel hitherto unknown. Amongst these important services is one to be maintained from Slily to September around Mont Blanc, from Chamonix over the Grand and the Petit St. Bernard to Courmaver, and vice versa. There will be two services, one by a French and the other by an Italian company, using 11-seater Fiat and Spa coaches.

A very convenient and popular international service is one from Turin, in Italy, over the Alps to Brianeon, in France, thus uniting two towns which are only indirectly connected by rail. The height of the pass on this route is 6,669 ft.; Spa 20-passenger coaches are used for this run. There is another direct daily service from Turin to Nice, via the Col de Tende, at an altitude of 3,248 ft. Mont Cenis, 6,836 ft. above sea-level, can be reached daily by Spa motor •coaches starting from Turin, and from the top of the pass French coaches carry travellers to Modane and Chainbery.

As exhibitions are being held in Turin and Milan during this summer, arrangements have been made for joint rail and coach tours from France, Switzerland and Austria to these two cities. Rail and coach interests are working together on this programme.