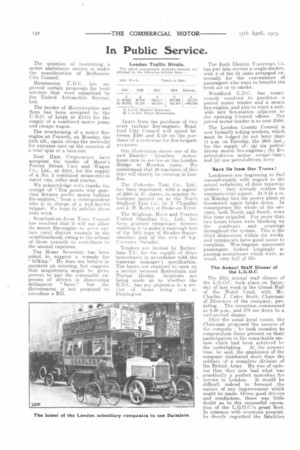 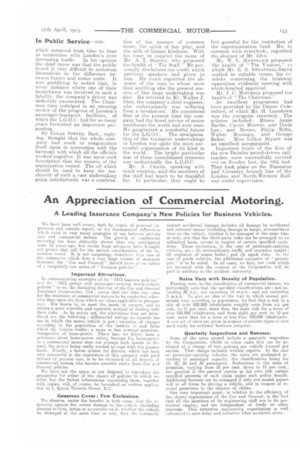 Page 8, 17th April 1913 — In Public Service.
Close
Noticed an error?
If you've noticed an error in this article please click here to report it so we can fix it.
Keywords : Light Rail, Tram, Steam Wagon

The question of instituting a motor ambulance service is under the consideration of Melbourne City Council.

Hunstanton U.D.C. has approved certain proposals for local services that were submitted by the United Automobile Service, Ltd.

The tender of Merryweather and Sons has been accepted by the U.D.C. of Leigh at 1018 for the supply of a combined motor pump and escape wagon.

The overturning of a motor fireengine at Penarth, on Monday, the 24th ult., again shoys the necessity for extreme careon the occasion of a trial spin or a turn-out.

East Ham Corporation have accepted the tender of Mann's Patent Steam Cart and Wagon Co., Ltd., at £610, for the supply of a No. 2 combined steam-driven water van, roller arid tractor.

We acknowledge with thanks the receipt of " Ten points why practical firemen prefer motor turbine fire-engines," from a correspondent who is in charge of a well-known brigade. We hope to publish these next week.

Stratford-on-Avon Town Council has resolved that it will not allow its motor fire-engine to serve certain rural district councils in the neighbourhood, owing to the refusal of those councils to contribute to the annual expenses.

The Home Secretary has been asked to suggest a remedy for " bilking." He does not believe in payment on entering, but suggests that magistrates might be given powers to pay the reasonable expenses of drivers in discovering delinquent "fares." hut the Government is not prepared to introduce a Bill. Apart from the purchase of two more turbine' fire-engines, Bradford City Council will spend between 2400 and 160 on the purchase of a motorcar for fire-brigade purposes.

Our illustration shows one of the

new Daimler '• Gearless motorbuses now in service on the London Bridge to Hendon route. We understand that 20 machines of this type will shortly be running in London.

The Potteries Taxi Co., Ltd., has been registered, with a capital of I:600 in shares, to acquire the business carried on as the North Stafford Taxi Co., by J. Chandler and J. H. Ketley at Stoke-on-Trent.

The Brighton, Hove and Preston United Omnibus Co.. Ltd., has been granted temporary licences enabling it to make a thorough test of the 1913 type of Straker-Squire omnibus and of the new 40 h.p. Coventry Daimler.

Tenders are invited by Rotherham T.C. for the supply of thres motorbuses in accordance with the tramway manager's specification. The buses are required to open up a service between Rotherham and Thorpe Hesley. Inquiries are being. made as to whether the R.D.C. has any objection to a service of buses being run to Dinningt on.

The Bath Electric Tramways Co_ has lout into service a single-decker, with 8 of the 33 seats arranged externally for the convenience of passengers who want to breathe thefresh air or to smoke.

Woodioid U.D.C. has unanimously resolved to purchase a petrol motor tender and a steam tire-engine, and also to erect a suitable new fire-station adjacent to the existing Council offices. The petrol motor tender is to cost L050, The London County Council is now formally asking tenders, which must be lodged by not later than 11 a.m. on Tuesday, the 29th inst, for the supply of : (a) six petroldriven motor fire-engines; (b) five petrol-driven motor escape-vans ; and (0) one petrol-driven lorry.

Save Us from Our Trams: Londoners are beginning to feel uncomfortable with regard to the actual reliability of their tramway system ; they already realize its uncommercial aspect. At 8.65 a.m. on Monday last the power plant at Greenwich again broke down. In consequence the whole of the services. both North and South, were this time crippled. For more than two hours trams were blocking up the roadways and crossings throughout the system. This is the third dislocation within six weeks. and ratepayers have good cause to complain. Woe-begone, marooned passengers looked longingly at passing motorbuses which were, asusual, very full of life.

The Annual Staff Dinner of the L.G.O.C.

The fifth annual staff dinner of the L.G.O.C. took place on Saturday of last week in the Grand Hall of the Hotel Cecil, with Mr. Charles J. Cater Scott, Chairman of Directors of the company, presiding. The reception commenced at 6.30 p.m., and 378 sat down to a well-served dinner.

After the usual loyal toasts, the Chairman proposed the success of the company: he took occasion to congratulate those present on their participation in the remarkable success which had been achieved by the undertaking. At the present time, he said, the employees of the company numbered more than the soldiers of a complete division of the British Army. He was of opinion that they now had what was practically a perfect motorbus for service in London. It would be difficult indeed to forecast the nature of any improvement which might be made. Gwen good drivers and conductors, there was littIe doubt as to the successful operation of the L.G.0.0.'s great fleet. In common with everyone present. he deeply regretted the fatalities

which occurred from time to time in connection with London's ever increasing traffic. In his opinion the chief cause was that the public round it very difficult to accustom themselves to the difference between horses and motor units. It was gratifying to notice that, in every instance where one of their motorbuses was involved in s.uch a fatality, the company's driver was definitely exonerated. The Chairman then indulged in an amusing review of the progress of London's passenger-transport facilities, of which the L.G.O.C. had for so many years furnished an important proportion. 6ir EDGAR. SPEYER, Bart., replying, thought that the whole company had much to congratulate itself upon in connection with the harmony with which all the officials worked together. It was upon such foundation that the success of the organization rested. The oil which should be used to keep the machinery of such a vast undertaking going satisfactorily was a combina tion of tile essence of common sense, the spirit of fair play, and the milk of human kindness. With his toast he coupled the name of Mr. A. T. Stanley, who proposed the health of " The Staff. Be personally disclaimed the credit which previous speakers had given to him. He much regretted the absence of the man to whom more than anything else the present success of this huge undertaking was due. He referred to Mr. Walter J. Iden, the company's chief engineer, who unfortunately was suffering from a breakdown. He considered that at the present time the company had the finest service of motor omnibuses the world had ever seen. He prophesied a wonderful future for the L.G.0,C. The amalgamation of the transport undertakings in London was quite the most successful organization of its kind in the world. The bright particular star of these consolidated interests was undoubtedly the L.0.0.0.

Mr. A. CRANE, speaking with much emotion, said the members of the staff had much to be thankful for. In particular, they ought to feel grateful for the institution of this superannuation fund. He, in common with everybody, regretted the absence of Mr. Iden.

Mr. J. C. MITCHELL proposed the health of " The Chairman."

An excellent programme had been provided by the Dinner Committee, of which Mr. H. Lansdown was the energetic secretaity. The artistes included: Misses Annie Bartle, Carrie Herwin, and Doris Lee ; and Messrs. Philip Ritte, Walter Montagu, and George

Baker. Miss Lillian Bryant was an excellent accompanist. Important trials of the first of the new Daimler petrol-driven railcoaches were successfully carried felt on Sunday last, the 13th inst. They took place on the Nuneaton and Coventry branch line of the London and North-Western Railway under supervision.