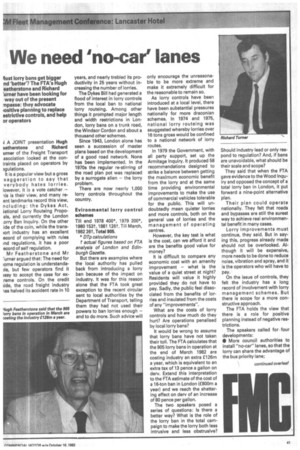 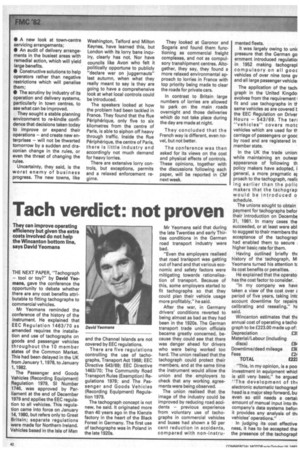 Page 25, 16th October 1982 — We need 'no-car' lanes
Close
Noticed an error?
If you've noticed an error in this article please click here to report it so we can fix it.
Keywords : Truck, Lorry, Semi-trailer Truck

'lust lorry bans get bigger nd 'better'? The FTA's Hugh eatherstone and Richard 'urner have been looking for way out of the present rnpasse: they advocate )ositive planning to replace estrictive controls, and help or operators

.1 A JOINT presentation Hugh eatherstone and Richard urner of the Freight Transport .ssociation looked at the contraints placed on operators by 3g ulations.

It is a popular view but a gross xaggeration to say that verybody hates lorries. lowever, it is a vote catcher — us is their view, and many reent landmarks record this view, ncluding: the Dykes Act, lational Lorry Routeing Propoals, and currently the London .orry Ban Inquiry. On the other ide of the coin, while the transloft industry has an excellent ecord of complying with rules ind regulations, it has a poor ecord of self regulation.

Mr Featherstone and Mr -urner argued that: The need for ;orne regulation is understanda)le, but few operators find it :asy to accept the case for exreme controls. On the credit ;ide, the road freight industry as halved its accident rate in 10

years, and nearly trebled its productivity in 25 years without increasing the number of lorries.

The Dykes Bill had generated a flood of interest in lorry controls from the local ban to national lorry routeing. Among other things it prompted major length and width restrictions in London, lorry bans on a trunk road, the Windsor Cordon and about a thousand other schemes.

Since 1943, London alone has seen a succession of master plans based on the development of a good road network. None has been implemented. In the 1970s the regular re-stirring of the road plan pot was replaced by a surrogate alien — the lorry problem.

There are now nearly 1,000 lorry controls throughout the country.

But there are examples where the local authority has pulled back from introducing a lorry ban because of the impact on industry. It was for this reason alone that the FTA took great exception to the recent circular sent to local authorities by the Department of Transport, telling them they had not used their powers to ban lorries enough — and to do more. Such advice will only encourage the unreasonable to be more extreme and make it extremely difficult for the reasonable to remain so.

As lorry controls have been introduced at a local level, there have been substantial pressures nationally for more draconian schemes. In 1974 and 1975, national lorry routeing was ssuggested whereby lorries over 16 tons gross would be confined to a national network of lorry routes.

In 1979 the Government, with all party support, set up the Armitage Inquiry. It produced 58 recommendations designed to strike a balance between getting the maximum economic benefit from the lorry and at the same time providing environmental improvements to make the use of commercial vehicles tolerable for the public. This will undoubtedly mean quieter lorries and more controls, both on the general use of lorries and the management of operating centres.

However, the key test is what is the cost, can we afford it and are the benefits good value for money?

It is difficult to compare any economic cost with an amenity improvement — what is the value of a quiet street at night? Residents will value it highly provided they do not have to pay. Sadly, the public feel dissociated from the benefits of lorries and insulated from the costs of any "improvements".

What are the costs of lorry controls and how much do they hurt? Are operations penalised by local lorry bans?

It would be wrong to assume that lorry bans have not taken their toll. The FTA calculates that the 905 lorry bans in operation at the end of March 1982 are costing industry an extra f126m a year, which is equivalent to an extra tax of 13 pence a gallon on derv. Extend this interpretation to the FTA estimate of the cost of a 16-ton ban in London (£800m a year) and we reach the shattering effect on dery of an increase of 80 pence per gallon.

The two speakers posed a series of questions: Is there a better way? What is the role of the lorry ban in the total campaign to make the lorry both less intrusive and less obstrusive? Should industry lead or only respond to regulation? And, if bans are unavoidable, what should be their scale and scope?

They said that when the FTA gave evidence to the Wood Inquiry and opposed the concept of a total lorry ban in London, it put forward a nine-point alternative plan.

Their plan could operate nationally. They felt that roads and bypasses are still the surest way to achieve real environmental benefit in many cases.

Lorry improvements must continue, they said. But in saying this, progress already made should not be overlooked. Although it will be expensive, more needs to be done to reduce noise, vibration and spray, and it is the operators who will have to pay.

On the issue of controls, they felt the industry has a long record of involvement with lorry management schemes. But there is scope for a more constructive approach.

The FTA holds the view that there is a role for positive planning instead of negative restrictions.

The speakers called for. four developments: • More council authorities to install "no-car" lanes, so that the lorry can share the advantage of the bus priority lane; • A new look at town-centre servicing arrangements; • An audit of delivery arrangements in the busiest areas with remedial action, which will yield large benefits.

• Constructive solutions to help operators rather than negative restrictions which will penalise them; • The scrutiny by industry of its operation and delivery systems, particularly in town centres, to see what can be improved.

They sought a stable planning environment to re-kindle confidence that decisions taken today to improve or expand their operations — and create new enterprises — will not be thwarted tomorrow by a sudden and draconian change in the rules, or even the threat of changing the rules.

Uncertainty, they said, is the worst enemy of business progress. The new towns, like Washington, Telford and Milton Keynes, have learned this, but London with its lorry bans inquiry, clearly has not. Nor have councils like Avon who felt it politically opportune to publicly "declare war on juggernauts" last autumn, when what they really meant to say is they are going to have a comprehensive look at what local controls could be introduced.

There are extensive lorry controls, but exceptions, permits and a relaxed enforcement regime. They looked at Garonor and Sogaris and found them functioning as commercial freight complexes, and not as compulsory transhipment centres. Altogether, they say, they found a more relaxed environmental approach to lorries in France with top priority being made to clear the roads for private cars.

In contrast to Britain large numbers of lorries are allowed to park on the main roads overnight and those deliveries which do not take place during the day are made at night.

They concluded that the French way is different, even novel, but not better.

The conference was then asked for its views on the cost and physical effects of controls. These opinions, together with the discussions following each paper, will be reported in CM next week.