'Get Together' L.A. Tells Them All W n HEN a application 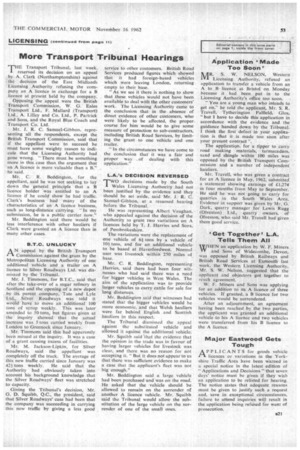 Page 55, 16th November 1962 — 'Get Together' L.A. Tells Them All W n HEN a application
Close
Noticed an error?
If you've noticed an error in this article please click here to report it so we can fix it.
Keywords : Traffic Law, Personal Identification, Business / Finance

by W. F. Miners and Sons of Widecombe, Devon, was opposed by British Railways and British Road Services at Exmouth last week, the Western Licensing Authority, Mr. S. W. Nelson, suggested that the applicant and objectors got together to reach agreement.

W. F. Miners and Sons was applying for an addition to its A licence of three vehicles. If granted, a B licence for two vehicles would be surrendered.

After an adjournment, an agreement having been reached by the two parties, the applicant was granted an additional vehicle to his A licence and two vehicles were transferred from his B licence to the A licence.