Why and Where Long-distance Bus Travel Will Develop. 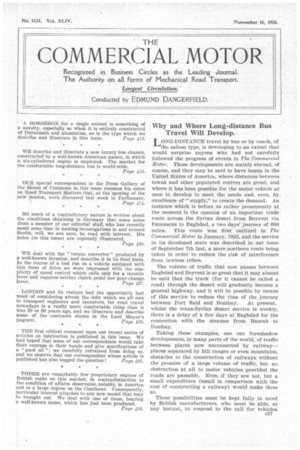 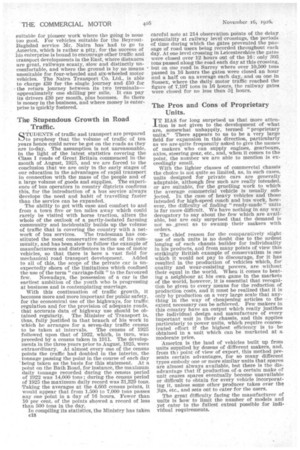 Page 39, 16th November 1926 — Why and Where Long-distance Bus Travel Will Develop.
Close
Noticed an error?
If you've noticed an error in this article please click here to report it so we can fix it.
Keywords : Traffic Law, Road Transport, Traffic Signs, Road Safety, Traffic, Level Crossing, Right- And Left-hand Traffic, Roundabout

LONG-DISTANCE travel by bus or by coach, of the saloon type, is developing to an extent that would surprise anyone who had not carefully followed the progress of events in The Commercial Motor. These developments are mainly abroad, of course, and they may be said to have begun in the United States of America, where distances between towns and other populated centres are great, and where it has been possible for the motor vehicle at once to develop to meet the needs and, even, by, excellence or" supply," to create the demand. An instance which is before ;us rather prominently at the moment is the opening of an important trade route across the Syrian desert from BeyrOut via Damascus to Baghdad, a two days' journey of 600 miles. This route was first outlined in The Commercia& Motor in January, 1923, and the service in its developed state was described in our issue of September 7th last, a more northern route being taken in order to reduce the risk of interference from lawless tribes.

The volume of traffic that now passes between Baghdad and Beyrout is so great that it may almost be said that the track (for it cannot be called a road) through the desert will gradually become a general highway, and it will be possible by means of this service to reduce the time of the journey between Port Said and Bombay. At present, whilst the trans-Syrian desert service is weekly, there is a delay of a few days at Baghdad for the connection with the steamer from Basrah to Bombay.

Taking these examples, one can foreshadow developments, in many parts of the world, of traffic between places now unconnected by railway— places separated by hill ranges or even mountains, obstacles to the construction of railways without the promise of a large volume of traffic, but no obstruction at all to motor vehicles provided the roads are passable. Even if they are not, but a small expenditure (small in comparison with the cost of constructing a railway) would make them so.

These possibilities must be kept fully in mind by British manufacturers, who must be able, at any instant, to respond to the call for vehicles suitable for pioneer work where the going is none too good. For vehicles suitable for the BeyroutBaghdad service Mr. Nairn has had to go to America, which is rather a pity, for the success of his enterprise is bound to encourage other traffic and transport developments in the East, where distances are great, railways scanty, slow and distinctly uncomfortable, and where the ground is by no means unsuitable for four-wheeled and six-wheeled motor vehicles. The Naira Transport Co. Ltd„ is able to charge £30 for the single journey and £50 for • the return journey between its two terminals— approximately one shilling per mile. It can pay Its drivers £30 per month, plus bonuses. So there Is money in the business, and where money is enterprise is quickly fostered.

The Stupendous Growth in Road Traffic.

STUDENTS of traffic and transport are prepared to prophesy that the volume of traffic of ten years hence could never be got on the roads as they are to-day. The assumption is not unreasonable, in the light of the latest statistics covering the Class I roads of Great Britain commenced in the month of August, 1925, and we are forced to the conclusion that we are only in the early stages of our education in the advantages of rapid transport in connection with the mass of the people and of a large volume of goods and supplies. The experience of bus operators in country districts confirms this, for the introduction of a bus service always develops the need and habit of travelling faster than the service can be expanded. The ability to get with ease and comfort to and from a town five or ten miles away which could rarely be visited with horse traction, alters the whole of the outlook of a partly-isolated farming community and incidentally builds up the volume of traffic that is covering the country with a network of bus services. The tradesman has constituted the most conservative section of its community, and has been slow to follow the example of manufacturers and distributors in the use of motor vehicles, so that there is here a vast field for mechanical road transport development. Added to all of this, the scope of the private car is unexpectedly shorn of the limitations which confined the use of the term " carriage-folk" to the favoured few. Nowadays, the possession of a car is the earliest ambition of the youth who is progressing at business and is contemplating marriage.

With this continuation of traffic growth, it becomes more and more important for public safety, for the economical use of the highways, for traffic regulation and for the provision of adequate roads, that accurate data of highway use should be obtained regularly. The Minister of Transport is, thus, fully justified in that branch of his work in which he arranges for a seven-day traffic census to be taken at intervals. The census of 1925 followed upon that of 1922, which, in turn, was preceded by a census taken in 1911. The developments in the three years prior to August, 1925, were extraordinary. At almost every one of the census points the traffic had doubled in the interim, the tonnage paSsing the point in the course of each day being taken as the basis for this statement. At a point on the Bath Road. for instance, the maximum daily tonnage recorded during the census period of 1922 was 14,000 tons ; during the census period of 1925 the maximum daily record was 31,329 tons. Taking the averages at the 4,603 census points, it would appear that from 1,500 to 7,000 tons passes any one point in a day of 16 hours. Fewer than 10 per cent. of the points showed a record of less than 500 tons in the day.

In compiling its statistics, the Ministry has taken c18 careful note at 214 observation points of the delay potentiality at railway level crossings, the periods of time during which the gates prevented the passage of road users being recorded throughout each day. At one level crossing in Leicestershire the gates were closed over 12 hours out of the 16: only 303 tons passed along the road each day at this crossing, but on one road in Surrey where over 10,500 tons passed in 16 hours the gates were closed an hour and a half on an average each day, and on one in Sussex, where the daily, motor traffic reached the figure of 7,197 tons in 16 hours, the railway gates were closed for no less than 51 hours.

The Pros and Cons of Proprietary Units.

IT HAS for long surprised us that more attention is not given to the development of what are, somewhat unhappily, termed 'proprietary units." There appears to us to be a very large field for expansion in this direction, particularly as we are quite frequently asked to give the names ' of makers who can supply engines, gearboxes, axles, steering gear, etc., and, when it comes to the point, the number we are able to mention is exceedingly small.

With the lighter classes of commercial chassis the choice is not quite so limited, as, in such cases, units designed for private cars are generally adaptable, although few such are really intended, or are suitable, for the gruelling work to which the average commercial vehicle is usually subjected. In the case of heavy vehicles and those intended for high-speed coach and bus work, however, the difficulty of finding " ready-made " units is far more difficult. We have nothing in any way derogatory to say about the few which are available, but are only surprised that the demand is not so „great as to swamp their makers with orders.

The chief reason for the comparatively slight use of such units is no doubt due to the ardent longing of each chassis builder for individuality in his products, and from many points of view this strikingly British example of conservatism is one which it would not pay to discourage, for it has resulted in the production of vehicles which, for quality and wear-resisting powers, are without their equal in the world. When it comes to beating a neighbour at his own game in the markets of the world, however, it is essential that recognition be given to every means for the reduction of production costs, and it must be realized that it is only by production on a very large scale that anything in the way of cheapening articles to the extent necessary can be achieved. Few makers in this cOuntry have an output which really justifies the individual design and manufacture of every important unit in their chassis, and this applies particularly to power units, which require concentrated effort if the highest efficiency is to be obtained in a unit which can be marketed at a moderate price.

'America is the land of vehicles built up from units supplied by dozens of different makers. and, from tit? point of view of export, this method presents certain advantages, for so many different types embody one or more similar units that spares are almost always available, but there is the disadvantage that if production of -a certain make of unit ceases spares eventually become unavailable or difficult to obtain for every vehicle incorporating it, unless some other producer takes over the jigs, etc., and sets out to cater for the users.

The great difficulty facing the manufacturer of units is how to limit the number of models and yet cater to the fullest extent possible for individual requirements.