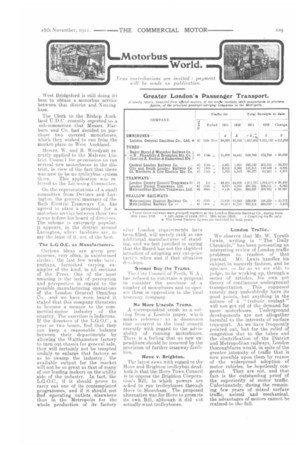 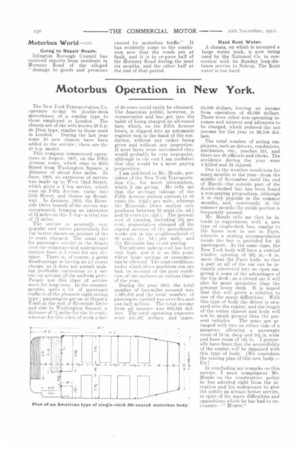 Page 9, 16th November 1911 — World.
Close
Noticed an error?
If you've noticed an error in this article please click here to report it so we can fix it.
Keywords : Brighton And Hove, Monarch's Way, Hove, Tram, Brighton, Trolleybus, Walthamstow

Yews contributions are invited payment will he made on publicatzon.

West Bridgeford is still doing its best to obtain a motorbus service between that district and Nottingham.

The Clerk to the Bishop Auckland U.D.C. recently reported to a sub-committee that Messrs. liarburn and Co. had decided to purchase two covered motorbuses, which they wished to run from the market-place to West Auckland.

Messrs, W. and B. Woodyatt recently applied to the Malvern District Counc:1 for permission to run several new motorbuses in the district, in view of the fact that there was now to be no trolleybus system there. This application was referred to the Licensing Commillee.

On the representations of a small committee from Devizes au.d Layingten, the general manager of the Bath Electric Tramways Co. has agreed to place a proposal for a motorbus service,. between those two towns before his board of directors. The scheme is extremely popular. it appears, in the district around LaNington, where facilities are, to say the !east of it, not of the best.

Curious ideas are given prominence, very often, in uninformed circles the last. few weeks have, perhaps, furnished varying examples of the kind, in all sections of the -Press. One of the most amusing is the lack of perception and perspective in regard to the possible manufacturing operations of the London General Omnibus Co., and we have even heard it stated that this company threatens to become a menace to the cornmereial-motor industry of the country. The assertion is ludicrous. If the directors of the L.G.O.C., a year or two hence, find that they can keep a reasonable balance between their departments by allowing the Walthamstow factory to turn out chassis for general sale, they will certainly not. be tempted unduly to enlarge that. factory so as to swamp the industry ; the available output for the market will not be so great as that of many of our leading makers on the utility side of the industry. In fact, the L.G.O.C., if it should prove to carry out one of its contemplated programmes, and if it should not find operating outlets elsewhere than in the Metropolis for the whole production of its factory

after London requirements have been filled, will merely rank as one additional manufacturer of standing, and we feel justified in saying that the Board has not the slightest. intention of adopting any cut-prico tactics when and if that situation develops.

The Cite Council of Perth, W.A., has refused to entertain a proposal to consider the purchase of a number of motorbuses and to operate them in opposition to the local ti'aiiiway company.

A correspondent sends us a• cut.ling from a Lincoln paper, which makes referenc., to a, discussion that occurred in the local council recently with regard to theadvisability of running motorbuses. There is a feeling that no new expenditure should be incurred by the provision of further tramway facilities.

The latest news with regard to the Have and Brighton trolleybus deadlock is that the Hove Town Council is to oppose the Brighton Corporation's Bill, in which powers are asked to run trollcybuses through Hove to Shoreham. The proposed alternative was for Hove to promote its own Bill, although it did not actually want trolleybuses.

We observe that Mr. W. Yorath Lewis, writing in ".The Daily Chronicle," has been presenting an interesting review of London traffic problems to readers of that unreal. Mr. Lewis handles his subject in masterly fashion, and he app,Ars, o far as we are able to judge, to be working up, through a series of articles, his own pet. theory of continuous underground transportation. This supposed remedy may undoubtedly have its good points, but anything in the nature of a " trottoir roulant " will not got rid of the demand for more motorbuses. Underground developments are not altogether harmful to the interests of surface transport. As we have frequently pointed out, but for the relief of congestion due to the tubes and the electrification of the District and Metropolitan railways, London thoroughfares would, in spite of the greater intensity of traffic that is now possible upon them by reason of the widespread adoption of motor vehicles, be hopelessly congested. They are not, and that fact is the outstanding proof of the superiority of motor traffic. Unfortunately, during the remaining few years of mixed surface traffic, animal and mechanical, the advantages of motors cannot he realized to the full.

Islington Borough Council has received reports from residents in Hornsey Road of the alleged " damage to goods and premises caused by motorbus traffic." It has evidently come to the conclusion now that the roads are at fault, and it is to re-pave half of the Hornsey Road during the next six months, and the other half at the end of that period. Hard Kent Water.

A chassis, on which is mounted a large water tank, is now being used by the National Co. in connection with its Sunday long-distance service to Sidcup. The Kent water is too hard.