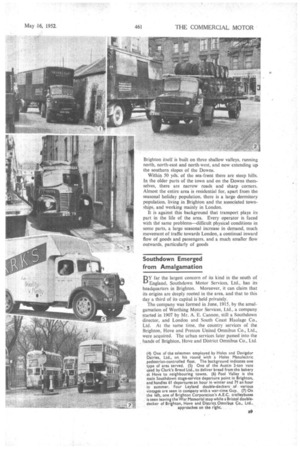 Page 43, 16th May 1952 — Southdown Emerged from Amalgamation ny far the largest concern of its kind in the south of
Close
Noticed an error?
If you've noticed an error in this article please click here to report it so we can fix it.
Keywords : East Sussex, Counties Of England, Local Government In England, Transport In East Sussex, Brighton And Hove, Monarch's Way, Southdown Motor Services, Stagecoach Group, Southdown, Brighton, Hove, Maidstone & District Motor Services

England, Southdown Motor Services, Ltd., has its headquarters in Brighton. Moreover, it can claim that its origins are deeply rooted in the area, and that to this day a third of its capital is held privately.

The company was formed in June, 1915, by the amalgarnation of Worthing Motor Services, Ltd., a company started in 1907 by Mr. A. E. Cannon, still a Southdown director, and London and South Coast Haulage Co., Ltd. At the same time, the country services of the Brighton, Hove and Preston United Omnibus Co., Ltd., were acquired. The urban services later passed into the hands of Brighton, Hove and District Omnibus Co., Ltd.

(4) One of the salesmen employed by Holes and Davigdor Dairies, Ltd., on his round with a Holes Manulectric pedestrian-controlled float. The background indicates one type of area served. (5) One of the Austin 2-ton vans used by Clark's Bread Ltd., Co deliver bread from the bakery at Hove to neighbouring towns. (6) Pool Valley is the main Southdown stage-service departure point in Brighton, and handles 61 departures an hour in winter and 71 an hour in summer. Four Leyland double-deckers of. various . vintages are seen in company with a war-time Guy. (7) On the left, one of Brighton Corporation's A.E.C. trolleybuses is seen leaving the War_Mernorial stop while a Bristol double. decker of Brighton, Hove and District Omnibus Co., Ltd..

approaches on the right.