ALL KINDS GO TO MAKE NW! 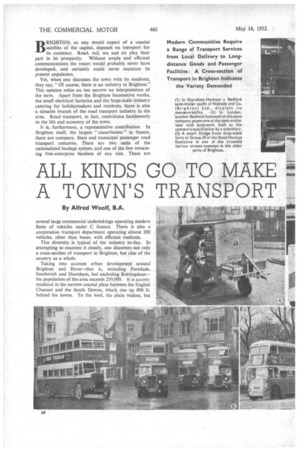 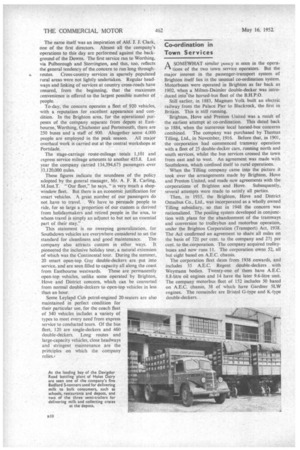 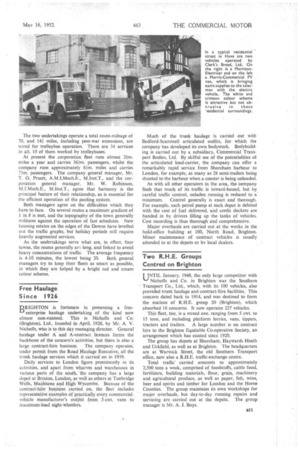 This diversity is typical of the industry to-day. In attempting to examine it closely, one discovers not only a cross-section of transport in Brighton, but also of the country as a whole.

Taking into account urban development around Brighton and Hove—that is, including Portslade, Southwick and Shoreham, but excluding Rottingdeanthe population of the area exceeds 250,000. It is accommodated in the narrow coastal plain between the English Channel and the South Downs, which rise up 800 ft. behind the towns. To the west, the plain widens, but The name itself was an inspiration of Ald. J. J. Clark, one of the first directors. Almost all the company's operations to this day are performed against the background of the Downs. The first service ran to Worthing, via Pulborough and Storrington, and this, too, reflects the general tendency of the concern to run long through routes. Cross-country services in sparsely populated rural areas were not lightly undertaken. Regular headways and linking of services at country cross-roads have ensured, from the beginning, that the maximum convenience is offered to the largest possible number of people.

To-day, the concern operates a fleet of 920 vehicles, with a reputation for excellent appearance and condition. In the Brighton area, for the operational purposes of the company separate from depots at Eastbourne, Worthing, Chichester and Portsmouth, there are 250 buses and a staff of 900. Altogether some 4,000 people are employed in the peak season. All major overhaul work is carried out at the central workshops at Portslade.

These figures indicate the soundness of the policy adopted by the general manager, Mr. A. F. R. Carling, M.Inst.T. "Our fleet," he says, "is very much a shopwindow fleet. But there is an economic justification for smart vehicles. A. great number of our passengers do not have to travel. We have to persuade people to ride, for so large a proportion of our custom is derived from holidaymakers and retired people in the area, to whom travel is simply an adjunct to but not an essential part of their stay."

This statement is no sweeping generalization, for Southdown vehicles are everywhere considered to set the standard for cleanliness and good maintenance. The company also attracts custom in other ways. It pioneered the inclusive holiday tour, a natural extension of which was the Continental tour. During the summer, 20 smart open-top Guy double-deckers are put into service, and are seen filled to capacity all along the coast from Eastbourne westwards. These are permanently open-top vehicles, unlike some operated by Brighton, Hove and District concern, which can be converted from normal double-deckers to open-top vehicles in less than an hour.

Some Leyland Cub petrol-engined 20-seaters are also maintained in perfect condition for their particular use, for the coach fleet of 340 vehicles includes a variety of types to, meet every need from express service to conducted tours. Of the bus fleet, 120 are single-deckers and 460 double-deckers. Long routes and large-capacity vehicles, close headways and stringent maintenance are the principles on which the company relies., Co-ordination in Town Services A SOMEWHAT similar whey is seen in the opera" tions of the two town service operators. But the major interest in the passenger-transport system of Brighton itself lies in the unusual co-ordination system. Motorbuses were operated in Brighton as far back as 1902, when a Milnes-Daimler double-decker was introduced into the horsed-bus fleet of the B.H.P.O.

Still earlier, in 1883, Magnum Volk built an electric railway from the Palace Pier to Blackrock, the first in Britain. This is still running.

Brighton, Hove and Preston United was a result of the earliest attempt at co-ordination. This dated back lo 1884, when the numerous local horsed-bus concerns combined. The company was purchased by Thomas Tilling, Ltd., in November, 1916. Before that, in 1901, the corporation had commenced tramway operation with a fleet of 25 double-decker cars, running north and south services, whilst the bus services crossed the town from east and to west. An agreement was made with Southdown, which confined itself to rural operations.

When the Tilling company came into the picture it took over the arrangements made by Brighton, Hove and Preston United, and made new agreements with the corporations of Brighton and Hove. Subsequently, several attempts were made to satisfy all parties.

Then, in 1935, the Brighton, Hove and District Omnibus Co., Ltd., was incorporated as a wholly owned Tilling subsidiary, so that in 1948 the concern was nationalized. The pooling system developed in conjunction with plans for the abandonment of the tramways and conversion to trolleybus and motorbus operation, under the Brighton Corporation (Transport) Act, 1938. The Act confirmed an agreement to share all miles on the basis of 721 per cent. to the company and 271 per cent. to the, corporation. The company acquired trolleybuses and now runs 11. The corporation owns 52, all but eight based on A.E.C. chassis.

The corporation fleet dates from 1938 onwards, and includes 35 A.E.C. Regent double-deckers with Weymann bodies. Twenty-one of them have A.E.C. 8.8-litre oil engines and 14 have the later 9.6-litre unit. The company motorbus fleet of 152 includes 50 based on A.E.C. chassis, 38 of which have Gardner 5LW engines. The remainder are Bristol G-type and K-type double-deckers. The two undertakings operate a total route-mileage of 70, and 14} miles, including post-war extensions, are wired for trolleybus operation. There are 34 services in all, 10 of them worked by trolleybuses.

At present the corporation fleet runs almost 2im. miles a year and carries 361 m. passengers, whilst the company runs approximately 61m. miles and carries 73m. passengers. The company. general manager, Mr. T. G. Pruett, A.M.I.Mech.E., M.Inst.T., and the corporation general manager, Mr. W. Robinson, M.I.Mech.E., M.Inst.T., agree that harmony is the principal feature of their relationship, as is essential for the efficient operation of the pooling system.

Both managers agree on the difficulties which they have to face. On several routes a maximum gradient of 1 in 8 is met, and the topography of the town generally militates against the operation of fast schedules. New housing estates on the edges of the Downs have levelled out the traffic graphs, but holiday periods still require heavily augmented services.

As the undertakings serve what are, in effect, four towns, the routes generally ari long, and linked to avoid heavy concentrations of traffic. The average frequency is 4-10 minutes, the lowest being 20. Both general managers try to keep their fleets as smart as possible, in which they are helped by a bright red and cream colour scheme.