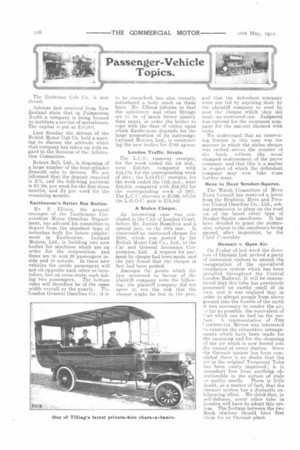 Eccleston Cab Co. is now Advices just received from New Zealand state that in Palmerston North .a company is being formed to institute a service of motorbuses. The capital is put at 210,000.

Last Sunday the drivers of the British Motor Cab Co. held a meeting to discuss the attitude which that company has taken up with regard to the decision of the Arbitration Committee.

Robert Bell, Ltd., is disposing of a large number of the four-cylinder Renault cabs to drivers. We are informed that the deposit required is 275, and the following payment is 24 10s. per week for the first three months, and 24 per week for the remaining months.

Mr. P. Ellison, the general manager of the Eastbourne Corporation Motor Omnibus Department, has advised his committee to depart from the standard type of motorbus body for future employment in Eastbourne. Leyland Motors, Ltd., is builditis two new bodies for machines which are on order for the corporation, and these are to seat 20 passengers inside and 18 outside. In these new vehicles the inside, passengers will not sit opposite each other as heretofore, but on cross seats, each taking two passengers, The bottom sides will therefore be of the same width overall as the panels. The London General Omnibus Co., it is to be remarked, has also recently introduced a body much on these lines. Mr. Ellison informs us that. the upholstery and other fittings are to be of much better quality than usual, in order the better to cope with the class of visitor upon which Eastbourne depends for the large proportion of its Patronage. Leyland Motors, Ltd., is constructing the new bodies for 2185 apiece.

An interesting case was concluded in the City of London Court, before Mr. Justice Hamilton and a special jury, on the 10th inst. It concerned an uncrossed cheque for 2640, which was posted by the British Motor Cab Co., Ltd., to the Car and General insurance Corporation, Ltd. A request for payment by cheque had been made, and the jury found that the cheque in fact had been posted.

and that the defendant company were not led by anything done by the plaintiff company to send by post the cheque which they did send—an uncrossed one. Judgment was entered for the insurance company for the amount claimed with costs.

We understand that an interesting feature in this case was the manner in which the stolen cheque was cashed across the counter of the bank, without the usual stamped endorsement of the payee company, and that this is a matter in respect of which the defendant company may now take some further steps.

The Watch Committee of Hove Town Council has received a letter from the Brighton, Hove and Preston "United Omnibus Co., Ltd., asking permission to place on the road six of the latest silent type of Straker-Squire omnibuses. It has been decided to grant the permission, subject to the omnibuses being passed, after inspection, by the Chief Constable.

On Friday of last week the directors of Ozonair Ltd. invited a party of interested visitors to attend the inauguration of the specialized ventilation system which has been installed throughout the Central London Railway. It will be remembered that this tube has previously possessed an .earthy smell of its own, and it was realized that in order to attract people from above ground into the bowels of the earth it was necessary to render the air, o far as possible, the equivalent of

at which can be had on the surface. A representative of THE .0.113TETICTAL MOTOR was interested f o examine the exhaustive arrangements which have been made for the ozonizing and for the cleansing of the air which is now forced into the tunnel at every station. Since the Ozonair system has been completed there is no doubt that the air in the original Twopenny Tube has been vastly improved ; it is nowadays free from anything objectionable in the nature of stale

or earthy smells. There is little doubt, as a matter of fact, that the Ozonair system has a distinctly exhilarating effect. We think that, in self-defence, every other tube in London will have to adopt this system. The footway between the two Bank stations lthould have first claim for an Ozonair plant.