A 32-vehicle B Licence Sought in Eastern Area 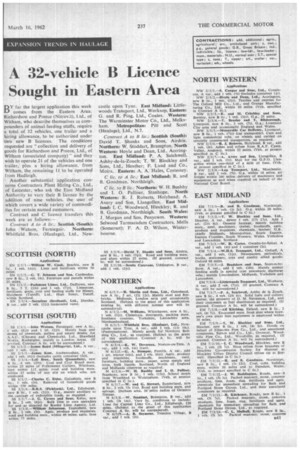 Page 75, 16th March 1962 — A 32-vehicle B Licence Sought in Eastern Area
Close
Noticed an error?
If you've noticed an error in this article please click here to report it so we can fix it.
Keywords : Braintree, Witham, Preece

BY far the largest application this week comes from the Eastern Area. Richardson and Preece (Nitrov:t), Ltd., of Witham, who describe themselves as cornpounders of animal feeding stuffs, require a total of 32 vehicles, one trailer and a hiring allowance, to be authorized under two new B licences. The conditions requested are "collection and delivery of goods for Richardson and Preece, Ltd., of Witham (associated company)" and they wish to operate 21 of the vehicles and one trailer, plus a hiring allowance, from Witham, the remaining II to be operated from Hadleigh.

• Another substantial application concerns Contractors Plant Hiring Co., Ltd., of Leicester, who ask the East Midland Authority to vary their B licence by the addition of nine vehicles, the user• of which covers a wide variety of commodities for certain named customers.