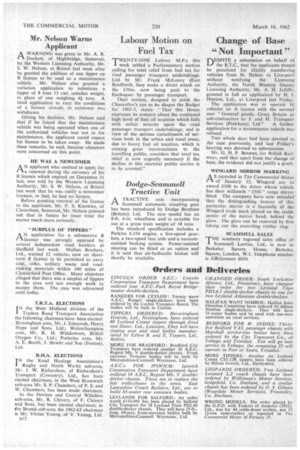 Page 46, 16th March 1962 — Mr. Nelson Warns Applicant
Close
Noticed an error?
If you've noticed an error in this article please click here to report it so we can fix it.
Keywords :

A WARNING was given to Mr. A. R. I-1 Duckett, of Highbridge, Somerset, by the Western Licensing Authority, Mr. S. W. Nelson, at Bristol last week after he granted the addition of one tipper on B licence to be used as a maintenance vehicle. Mr. Nelson also granted a variation application to substitute a tipper of 8 tons 13 cwt. unladen weight, in place of one weighing 41 tons. A third application to vary the conditions of a licence already in existence was withdrawn.

Giving his decision. Mr. Nelson said that if he found that the maintenance vehicle was being operated when one of the authorized vehicles was not in for maintenance, the applicant could expect his licence to be taken away. He made these remarks, he said, because objectors were concerned on this point.

HE WAS A NEWCOMER

AN applicant who omitted to apply for a renewal during the currency of his B licence which expired on December 31 last, was told by the Western Licensing Authority, Mr. S. W. Nelson, at Bristol last week that he was really a newcomer because, in fact, he had no licence.

Before granting renewal of the licence to the applicant, Mr. F. S. Knowles, of Claverharn, Somerset, Mr. Nelson pointed out that in future he must treat the matter much more seriously.

AN application for a substantive B licence was strongly opposed by several independent road hauliers at Sheffield last week. Mullan Brothers, Ltd, wanted 12 vehicles now on shortterm B licence to be permitted to carry coal, coke, colliery waste and roadmaking materials within 100 miles of Chesterfield Post Office. Many objectors alleged that there was a surplus of tippers in the area and not enough work to occupy them. The case was adjourned until today.

IN the Road Haulage Association's Rugby and North Warks sub-area, Mr. J. W. Richardson, of Richardson's Transport (Coventry), Ltd., has been elected chairman; in the West Bromwich sub-area Mr. S. P. Chambers, of P. S. and W. Chambers, has been made chairman.

In the Devizes and Central Wiltshire sub-area, Mr. R. Chivers, of F. Chivcrs and Sons, has been elected chairman; in the Stroud sub-area the 1962-63 chairman is Mr. Vivian Young, of V. Young, Ltd.