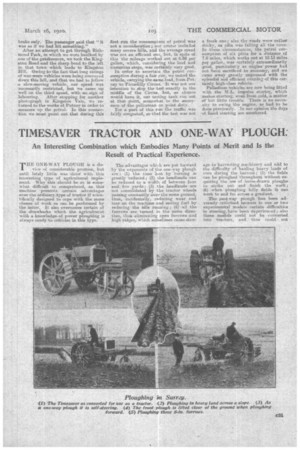 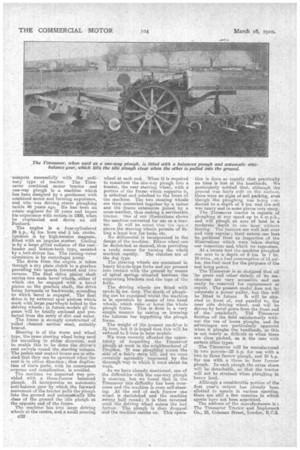 Page 15, 16th March 1920 — TIMESAVER TRACTOR AND ONE-WAY PLOUGH:
Close
Noticed an error?
If you've noticed an error in this article please click here to report it so we can fix it.

An Interesting Combination which Embodies Many Points of Merit and Is tlw Result of Practical Experience.

TiHE ONE-WAY PLOUGH is a de . vice of considerable promise, but mail lately little was done' with. this interesting type of agricultural implement. Why this -should be so is some. what difficult to comprehend, as this machine presents certain advantages over the ordinary, type of tractor if scientifically designed to cope with the same classes of work as c,an be performed by the latter. It also overoomes Certain of the drawbacks which the agriculturist with a knowledge of power ploughing is always ready to criticise in this type. The advantages whicili are put forward by -the exponents of the one-way plough are : (1) the time lost by turning is greatly reduced; (2) the headlands can he reduced to a width of between four and five yards; (3) the headlands are not consolidated by the tractor wheels passing constantly over the same ground, thus, incidentally, reducing wear and tear on the machine and saving fuel by reducing the -idle running ; (4) all the furrows are turned in the same direction, thus eliminating open fm-rows and high ridges, which sometimes cause dam

age to harvesting machinery and add to the difficulty of hauling heavy loads of corn daring the harvest; (5) the fields can be ploughed throughout without requiring the use of horse-drawn ploughs to strike out and finish the work; (6) when ploughing hilly fields it can work to and fro across a gradient.

The pail-way plough has been adversely criticised because in one or two experimental models certain difficalties in steering, have been experienced; also these models totild not be converted into tractors, and thus could • not 'compete successfully with the ordinary type of tractor. The Timesaver combined motor traetor and one-way plough is a machine which has been designed by a gentleman with combined motor and farming experience, and who was driving steam ploughing tackle 40 years ago. Ile has been an estate engineer for 25 years and began his experience with motors in 1900, when he overhauled and drove an old Panhard.

The engine is a fonsecylindered 30 h.p.,41 ins, bore and 5 ins. stroke. Ignition is by high-tension magneto, fitted, with an impulse starter. Cooling is by a large gilled 'radiator ofthe east-. header and bottom-tank type, assisted by a belt-driven fan. The cooling-water • csreulation is by centrifugal pump. The drive from the engine is taken through a dry plate clutch to a gearbox providing two speeds forward and two reverse. The final drive pinion shaft carries two main bevel wheels' either of

with which can be engaged a bevel pinion on the gearbox shaft, the drive being forwards or backwards, according to. which "bevel is engaged.. The final drive is by external spur pinions which mesh with large gearwheels bolted to the driving wheels; in future models all the gears will be totally enclosed and protected from the entry of dirt and water. The frame is strongly constructed of rolled channel section steel, suitably braced.

Steering is of the Worm and wheel type, the sante steering wheel being used for travelling in either direction, and • to enable this to be done the driver's seat swivels round the steering column. The pedals and control levers we so situated that they can be operated when the seat is in either direction; thus duplication of there parts, with its consequent expense and complication, is avoided.

The machine we inspected was provided with a three-furrow balanced plough. -It incorporates an automatic anti-balance gear by , which, the forward movement of the tractor pulls the plough into the ground and automatically lifts clear of the ground the idle plough at the opposite end of the frame. The machine has two large driving wheels at the centre, and a small steering c32 wheel at each end. When it is required to transform the one-way plough into a tractor, the rear steering wheel, with a portion of the frame which supports it, is unbolted and rebolted to the front of the machine. The two steering wheels are then connected. together by a tiebar and the frame extensions joined by a cross-member, thus making a serviceable tractor. One of our illustrations shows the machine converted for use as a tree tor. It will be noted that the spa,e above the steering wheels permits of fitting a large box for tools, etc.

No differential is incorporated in the design of the machine.' Either wheel can he declutched as desired, thus providing a ready means for turning the whole machine rapidly. The clutches are of the dog type. The steering wheels are contained in heavy bicycle-type forks and are pressed into contact with the ground by means of spiral springs -situated between the supporting brackets and the tops of dia. forks.

The driving wheels are fitted with spuds 4 ins. deep. The depth of ploughing' can be regulated whilst the machine i is n operation by means of two hand wheels, which raise or lower the Whole plough frame. This is done in a very simple manner by raising or lowering the fulcrum bar suppcfrting the plough frame.

The weight of the present machine is 2-i tons, but it is hoped that this will be reduced to 2 tens in 'later models,

We were recently afforded the opportunity of inspecting the Timesaver plougi at work in the neighbourhood of Croydon. It was ploughing across the side of a fairly steep hill, amid we were certainly agreeably impressed by the thoroughh-way in which it went about its work.

As we have already Mentioned, one of the difficulties with the one-way plos1=.11 is steering, but we found that in the Timesaver this difficulty has been overcome and the machine is even self-steering. At the end a each furrow one wheel is declutched and the machine swung half round; it is then reversed until the driving wheel enters. the laet furrow. The plough is then dropped and the machine carries on. This opera tion is done so rapidly that practically no time is lost at the headlands. We particularly notified that, although the ground was fairly soft on the surface, there were no signs of-soil packing, even though the ploughing was being conducted to a depth of 8 ins. and the soil was heavy and in some places very stony. The Timesaver tractor is capable of ploughing at any speed up to 4. m.p.h., and will plough an acre of land to a moderate depth in one hour without forcing. The farrows are well laid over and very regular; their nature can best be gathered from an inspection of the illastrations which were taken during our inspection and., which we reproduce.

At a recent test tho machine ploughed one acre to a depth of 8 ins. in 1

10 mine., on a fuel consumption gallon, the-fuel used for the purposes of the test being petrol. The Timesaver is so designed that all -its gears and other details of its mechanism are very accessible and can -easily be removed for replacement or repair.The present model does not incorporate is power pulley, but this will be fitted in future. It will he situated in front of, and parallel to, the near side driving wheel, and will be driven by bevel gears from the front end of the crankshaft. Th4 Timesaver finishes off the field satisfactorily without the use of horse ploughs, and its advantages are particularly apparent when it ploughs the headlands' as this is not nearly so difficult as when these are close packed, as is the case with certain other types.

Although a considerable portion of the first year's output has already been allotted to agents in various ceuntie.s, there are still a few counties in which agents have not been appointed. The address of the manufacturers is : The Timesaver Tractor and Implement • Co., 23, Coleman Street, London, E3.C.2.