News of the Week. 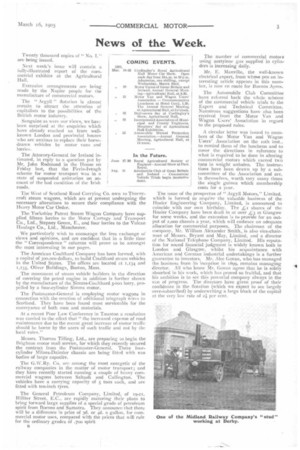 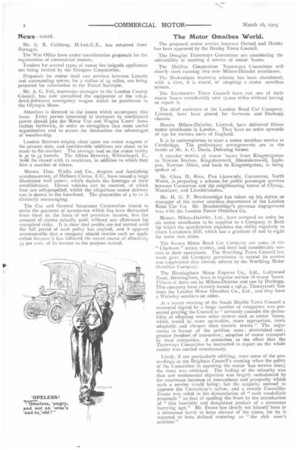 Twenty thousand copies of" No. I." are being issued.

Next week's issue will contain a fully-illustrated report of the commercial exhibits at the Agricultural H all.

Extensive arrangements are being made by the Napier people for I be manufacture of commercial motors.

The " Argyll " flotation is almost certain to attract the attention of capitalists to the possibilities of the British motor industry.

Sanguine as were our views, we have been surprised at the enquiries which have already reached us from wellknown London and provincial houses who are anxious to replace their horsedrawn vehicles by motor vans and lorries.

The Attorney-General for Ireland intimated, in reply to a question put by Mr. John Redmond in the House on Friday last, that the Pirrie-Iveagh scheme for motor transport was in a state of suspended animation on account of the bad condition of the Irish roads.

The West of Scotland Road Carrying Co. own to Thornecroft steam wagons, which are at present undergoing the necessary alterations to secure their compliance with the Heavy Motor Car Order.

We particularly wish to encourage the free exchange of views and opinions, and are confident that in a little time the "Correspondence " columns will prove to be amongst the most interesting in our pages.

The American Coultharcl Company has been formed, with a capital of 300.000 dollars, to build Coulthard steam vehicles in the United States. The offices are located at 1,134 and 1,135, Oliver Buildings, Boston, Mass.

The movement of steam vehicle builders in the direction of covering the petrol engine in addition is further shown by the manufacture of the Simins-Coulthard 5-ton lorry, propelled by a four-cylinder Simms motor.

The Postmaster-General is employing motor wagons in connection with the erection of additional telegraph wires to Scotland. They have been found most serviceable for the conveyance of both men and materials.

At a recent Poor Law Conference in Taunton a resolution was carried to the effect that "the increased expense of road maintenance due to the recent great increase of motor traffic should be borne by the users of such traffic and not by the local rates."

Messrs. Thomas Tilling, Ltd., are preparing to begin the Brighton motor mail service, for whieh they recently secured the contract from the Postmaster-General. Three fourcylinder Milnes-Daimler chassis are being fitted with van bodies of large capacity.

The G.W.Ry. Co. are anion.g the most energetic of the railway companies in the matter of motor transport; and they have recently started running a couple of heavy commercial wagons between Saltash and Callington. The vehicles have a carrying capacity of 5 tons each, and are fitted with ten-inch tyres.

The General Petroleum Company, Limited, of te-at, Billiter Street, E.C., are rapidly maturing their plans to bring forward large supplies of a special grade of petroleum spirit from Borneo and Sumatra. They announce that there will be a difference in price of 3d. or 4d. a gallon, for commercial motor uses, compared with the prices that will rule for the ordinary grades of .7oo spirit• The number or commercial motors using acetylene gas supplied in cylinders is increasing daily.

Mr. E. Manville, the well-known electrical expert, from whose pen an interesting article appears in this number, is now en route for Buenos Ayres.

The Automobile Club Committee have referred back the whole scheme of the commercial vehicle trials to the Expert and Technical Committee. Numerous suggestions have also been received from the Motor Van and Wagon Users' Association in regard to the proposed rules.

A circular letter was issued to members of the Motor Van and Wagon Users' Association on the 10th inst., to remind them of the luncheon and to cover the directions in reference to what is required to be done in altering commercial motors which exceed two tons in weight unladen. The instructions have been drawn up by a subcommittee of the Association and are, in themselves, worth very many times the single guinea which membership costs for a year.

The issue of the prospectus of " Argyll Motors," Limited, which is formed to acquire the valuable business of the Hozier Engineering Company, Limited, is announced to coincide with our own birthday. The shares of the Hozier Company have been dealt in at over L3 in Glasgow for some weeks, and the extension is to provide for an output of 2,000 chassis a year, which will embrace an adequate allocation for commercial purposes. The chairman of the company, Mr. William Alexander Smith,. is also vice-chairman of Messrs. Bryant and May, Limited, and a director of the National Telephone Company, Limited. His reputation for sound financial judgment is widely known both in London and Glasgow, whilst his acquaintance with American and German industrial undertakings is a further guarantee to investors. Mr. Alec Govan, who has managed the business from its inception in 1899, remains managing director. All who know Mr. Govan agree that he is solely absorbed in his work, which has proved so fruitful, and that his ambition is to see this powerful company always in the van of progress. The directors have given proof of their confidence in the flotation (which we expect to see largely over-subscribed) by underwriting a large block of the capital at the very low rate of ai per cent. Mr. E. R. Calthrop, M.Inst.C.E., has returned from Portugal.

The War Office have under•consideration proposals for the registration of commercial motors.

Tenders for several types of motor lire brigade appliances are being invited by the Glasgow Corporation.

Proposals for motor mail van services between Lincoln and surrounding towns, for a radius of 25 miles, are being prepared for submission to the Postal Surveyor.

Mr. A. C. Fell, tramways manager to the London County Council, has now completed the equipment of the 12h.p. Arrol-Johnston emergency wagon which he purchased at the Olympia Show.

Attention is directed to the insets which accompany this issue. Every person interested in transport by mechanical power should join the Motor Van and Wagon Users' Association forthwith, in order to strengthen that most useful organisation and to secure for themselves the advantages of membership.

London Brewers employ close upon too motor wagons at 'he present date, and considerable additions are about to be made to the number. The average load on the motor trolley is 30 to 35 barrels. The Albion Brewery, Whitechapel, E., hold the record with 12 machines, in addition to which they hire a number of others.

Messrs. Thos. Wallis and Co., drapers and furnishing warehousemen, of Holborn Circus, E.C., have issued a large illustrated wall poster, which depicts the frontage of their establishment. Eleven vehicles can be counted, of which four are self-propelled, whilst the ubiquitous motor delivery van is shown in the fore-front. The proportion of 4 to ii is distinctly encouraging.

The Car and General Insurance Corporation intend to resist the payment of income-tax which has been demanded from them on the basis of net premium income, less the amount of claims actually paid, without any allowance for unexpired risks. It is clear that profits are not earned until the full period of each policy has expired, and it appears unreasonable that a company should receive such an application because it has followed the sound course of allocating' 33 per cent, of its income to the purpose named.

The proposed motor service between Oxford and Henley has been approved by the Henley Town Council.

The Douglas Tramways Committee are considering the advisability of starting a service of motor 'buses.

The Beckenham tramway scheme has been abandoned, with a view, it is stated, of adopting a motor omnibus system.

The Eastbourne Town Council have run one of their motor 'buses considerably over 17,000 miles without having to repair it.

The chief contracts of the London Road Car Company, Limited, have been placed for Germain and Durkopp chassis.

Messrs. Milnes-Dainsler, Limited, have delivered fifteen motor omnibuses in London. They have on order upwards of 15o for various parts of England.

It is in contemplation to start a motor omnibus service in Cambridge. The preliminary arrangements are in the hands of Mr. A. C. Davis, Downing Grove.

A circular service of motor 'buses from Kingsteignton to Newton Station, Kingskerswell, Abbotskerswell, pen, Newton Abbot, and back to Kingsteignton, is being spoken of.

Mr. H. G. P. Brackenridge has taken up his duties as manager of the motor omnibus department of the London Road Car Co. Mr. Brackenridge's previous engagement was with the London Power Omnibus Co.

Messrs. Milnes-Daimler, Ltd., have accepted an order for six motor omnibuses to be supplied to a Company at Bath for which the specification stipulates the ability regularly to climb Lansdown Hill, which has a gradient of one in eight for some two miles.

The Sussex Motor Road Car Company are users of the " Clarkson " steam system, and have had considerable success in their operations. The Worthing Town Council last week gave the Company permission to extend its service and supplement that already offered by the Worthing Motor Omnibus Company.

The Birmingham Motor Express Co., Ltd., Ladywood Road, Birmingham, have in regular service 16 motor 'buses. Fifteen of them are by Milnes-Daimler and one by Durkopp. This company have recently leased a 24h.p. Thornycroft 'bus from the London Motor Omnibus Co., Ltd., and they have a Wolseley omnibus on order.

At a recent meeting of the South Shields Town Council a memorial signed by a large number of ratepayers was presented praying the Council to" seriously consider the desirability of adopting some other system such as motor 'buses, which would be more up-to-date, more appropriate, More adaptable and cheaper than electric trams." The arguments in favour of the petition were : diminished cost; greater freedom of movement; adoption of motor transport by rival companies. A resolution to the effect that the Tramways Committee be instructed to report on the whole matter was carried unanimously.

Lively, if not particularly edifying, were some of the proceedings at the Brighton Council's meeting when the policy of the Committee in opposing the motor 'bus service along the front was criticised. The feeling of the minority was that any sentimental objection was largely outbalanced by the enormous increase of convenience and prosperity which such a service would bring; but the majority seemed to approve the Committee's action, and a certain Councillor Evans was rabid in his denunciation of " such vandalistic proposals " as that of spoiling the front by the introduction of this inartistic and dangerous product of a strenuous hurrying age." Mr. Evans has dearly not himself been in a strenuous hurry to keep abreast of his times, for he is reported to have defined motoring as " the rich man's pastime."