The Great Work to be Done. 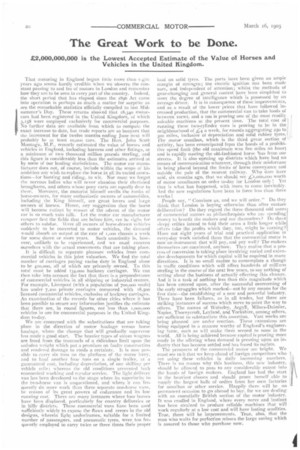 Page 20, 16th March 1905 — The Great Work to be Done.
Close
Noticed an error?
If you've noticed an error in this article please click here to report it so we can fix it.

Z2,000,000,000 is the Lowest Accepted Estimate a the Value of Horses and Vehicles in the United Kingdom.

That motoring in England began little more than seght years ago seems hardly credible when we observe the constant passing to and fro of motors in London and remember how they are to be seen in every part of the country. Indeed, the short twriod that has elapsed since the 180 Act came into operation is perhaps as much a matter for surprise as are the remarkable statistics officially compiled to last Mid-. summer's Day. These returns showed that 18,340 motorcars had been registered in the United Kingdom, of which 3,158 were employed exclusively for commercial purposes. No further data are available from which to compute the exact increase to date, but trade reports are so buoyant that the increment for the twelve months ending June next will probably be at least Remo cars. The Hon. John Scott Montagu, M.P., recently estimated the value of horses and vehicles in England, including harness and other fittings, at a minimum of two thousand million pounds sterling, and this figure is considerably less than the estimates arrived at by some of our leading statisticians, The motor car manufacturer does not, of course, include within the scope of his ambition any wish to replace the horse in all its varied avocations—for hunting and riding, to wit. Nor must we forget the nervous ladies who will never abandon their cherished broughams, and others whose pony carts are equally dear to them. Moreover, the motorist himself swells the ranks of horse-owners, for many enthusiastic owners of automobiles, including the King himself, are great lovers and large owners of horses. Hence, any suggestion that the horse will become extinct by reason of the advent of the motor car is so much vain talk. Let the motor car manufacturer conquer first the fields that are before him, ere he sighs for others to subdue. Were all owners of horse-drawn vehicles suddenly to be converted to motor vehicles, the demand would absorb an output at the rate of a000 chassis a week for some dozen or more years. Such unanimity is however, unlikely to be experienced, and we must concern ourselves with the actual movements that are taking place. It is difficult to separate pleasure vehicles from commercial vehicles in this joint valuation. We find the total number of carriages paying excise duty in England alone to be 420,000, all of which are privately owned. To this total must be added 134,000 hackney carriages. We can then take into account the fact that there is a preponderance of commercial vehicles in all shipping or industrial centres. For example, Liverpool (with a population of 700,000 souls) has under 7,200 private carriages compared with t8,soo licensed commercial vehicles, exclusive of heckney carriages. An examination of the records for other cities where it has been possible to secure any information justifies the estimate that there are, in round figures, not less than a000,000 vehicles in use for commercial purposes in the United Kingdom to-day.

We are concerned with the substitutions that are taking place in the direction of motor haulage versus horse haulage. where the change that will gradually supervene has made a good start. The heavier types of steam wagons are freed from the trammels of a ridiculous limit upon the unladen weiteht which put a premium on faults, construction and rendered damage to roads a certainty. It is now possible to carry six tons on the platform of the motor lorry. and to haul another four tons on a single trailer, at a guaranteed cost, including depreciation, of one shillala per vehicle mile; whereas the old conditions prevented both economical working and reaular service. The light delivery van has been develoned to the stage where its superiority to the two-horse van is unquestioned, and where it can frequently do more work than three separate one-horse vans, by reason of its great powers of endurance and its low running cost. There are many instances where four horses have been displaced, particularly for country deliveries or in hilly districts. These commercial vans have been used sufficiently widely to expose the flaws and errors in the old designs, wherein light underframes, suitable. for a limited number of passengers, and pneumatic tyres, were too frequently ,employed to carry twice or three times their proper load on solid tyres. The parts have been given an ample margin ot strength; the electric ignition tins been made sure, and independent of attention; whilst the methods of gear-changing and general control have been simphhed to meet the degree of intelligence which is possessed by an average driver. It is in consequence of these improvements, and as a result of the lower prices that have followed increased production, that the commercial van to take loads of between lomat. and a ton is proving one of the most readily saleable machines at the present time. The total cost of ' running these two-cylinder vans is proving to be in the ; neighbourhood of aat a week, for rounds aggregating 250 to 300 miles, inclusive ot depreciation and solid rubber tyres., Ilse motor omnibus, which is the third great section of a activity, has been emancipated from the bonds of a prohibitive speed limit (the old maximum was five miles an hour) and is rapidly ousting the old-fashioned horse 'bus from our streets. It is also opening up districts which have had no means of communication whatever, through their misfortune in being placed beyond the limits of horse conveyance and outside the pale of the nearest railway. Who dare have said, six months ago, that we should see .L'aocio,000 worth of motor cennibuses on order to-day for London only ! Yet that is %vital has happened, with more to come inevitably. And the new regulations have been in force less than three weeks

People say, " Convince us, and we will order." Do they think that London is buying otherwise than after mature deliberation? Do they regard the three thousand odd users of commercial motors as philanthropists who are spending money to benefit the makers and not themselves? Dn these eleepy critics intend to fold their arms a little longer while (alters take the profits which they, too, might be earning? Have not eight years of trial and practical application in every-day work satisfied them that the commercial motor is now an instrument that will pay, and pay well? The makers themselves are convinced, anyhow. They realise that a process of conversion is taking place involving varied and extensive developments for which capital will be required in many directions. It is no small matter to contemplate a change in traffic conditions which will affect hundreds of millions sterling in the course of the next few years, to say nothing of setting about the business of actually effecting this change. And it is a task of nothing less than this magnitude which has been entered upon, after the successful overcoming of the early struggles which marked—not by any means for the first time—the establishing of a new and powerful industry. There have been failures, as in all trades, but there are striking instances of success which serve to point the way to others. The names of Wolseley, Argyll, Milnes-Daimler, Napier, Thornycroft, Leyland, and Yorkshire, among others, are sufficient to substantiate this assertion. Vast works are being planned are under erection. These extensions are being equipped in a manner worthy of England's engineering fame, such as will make them second to none in the world. All is being achieved because capital is proving more ready in the offering when demand is pressing upon an industry that has become settled and has found its outlets. The prospects of the commercial motor are bright. We must see to it that we keep ahead of foreign competitors who are using these vehicles in daily increasing numbers. There is no reason why this business, this new industry„ should he allowed to pass to any considerable extent into the hands of foreIgn makers. England has had the start in the heaviest classes and should prove herself able to eupply the largest bulk of orders from her own factories for omnibus or other service. Happily there will be no permanent occasion to go abroad to buy, for we are dealing with an essentially British section of the motor industry. It was cradled in England, where every nerve and instinct has been strained to produce reliable machines that will work regularly at a low cost and will have lasting Qualities. True, there will he improvements. True, also, that the man who waits for perfection misses the large saving which is assured to those who purchase now.