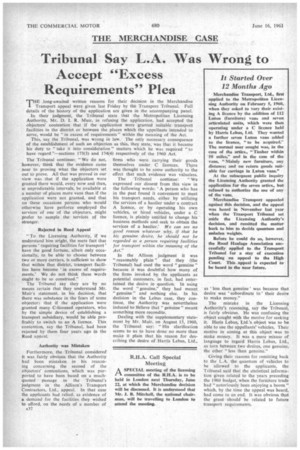 THE ,long-awaited written reasons for their decision in the Merchandise Transport appeal were given last Friday by the Transport Tribunal. Full details of the history of the application are given in the accompanying panel.

In their judgment, the Tribunal state that the Metropolitan Licensing Authority, Mr. D. I. R. Muir, in refusing the application, had accepted the objectors' contention that if the application were granted suitable transport facilities in the district or between the places which the appellants intended to serve, would be "in excess of requirements" within the meaning of the Act.

This, say the Tribunal, was wrong in law. The only necessary consequence of the establishment of such an objection as this, they state, was that it became his duty to "take it into consideration" matters which he was required "to have regard "—sections 173(3) and 174(4) respectively of the 1960 Act.

The Tribunal continue: "We do not, however, think that the evidence came near to proving what the objectors set out to prove. All that was proved in our view was that if the application were granted there would, every now and then, at unpredictable intervals, be available at a number of places more vans than if the application were not granted, and that on these occasions persons who would otherwise have perforce employed the services of one of the objectors, might prefer to sample the services of the stranger.

Rejected in Reed Appeal "To the Licensing Authority, if we understand him aright, the mere fact that persons 'requiring facilities for transport' have the good fortune, albeit only occasionally, to be able to choose between two or more carriers, is sufficient to show that within that district, transport facilities have become 'in excess of requirements.' We do not think these words ought to be so construed."

The Tribunal say they are by no means certain that they understand Mr. Muir's statement, in his decision, that there was substance in the fears of some objector; that if the application were granted many C-licensed operators, who by the simple device of establishing a transport subsidiary, would be able profitably to switch to an A licence. This contention, say the Tribunal, had been rejected by them four years ago in the Reed appeal.

Furthermore, the Tribunal considered' it was fairly obvious that the Authority had been mistaken in his reasoning concerning the second of the objectors' contentions, which was purported to have been based on a muchquoted passage in the Tribunal's judgment in the Allison's Transport Contractors. Ltd., appeal. In that case the applicants had relied, as evidence of a demand for the facilities they wished to afford, on the needs of a number of

A32 firms who were carrying their goods themselves under C licences. There was thought to be some authority to the effect that such evidence was valueless.

The Tribunal continue: "We expressed our dissent from this view in the following words: A person who has in the past found it convenient to meet his transport needs, either by utilizing the services of a haulier under a contract A licence, or by operating his own vehicles, or hired vehicles, under a C licence, is plainly entitled to change his business methods and seek to obtain the services of a haulier.' We can see no good reason whatever why, if that be his genuine desire, he should not be regarded as a person requiring facilities for transport within the meaning of the Act."

In the Allison judgment it was "reasonably plain" that they (the Tribunal) had used the word "genuine" because it was doubtful how many of the firms invoked by the applicants as potential customers, in fact, had entertained the desire in question. In using the word "genuine," they had meant " genuine " and nothing else. In his decision in the Lebus case, they continue, the Authority was nevertheless induced to Velieve that "genuine" meant something more recondite.

Dealing with the supplementary statement by Mr. Muir, on August 15, 1960, the Tribunal say: "His clarification seems to us to have done no more than make it plain that his reason for describing the desire of Harris Lebus, Ltd., as 'less than genuine' was because that desire was 'subordinate to' their desire to make money."

The mistake in the Licensing Authority's reasoning, say the Tribunal, is fairly obvious. He was confusing the object sought with the motive for seeking it. Hans Lebus, Ltd.'s object was to be able to use the appellants' vehicles. Their motive in aiming at this object was to make money, It was a mere misuse of language to regard Harris Lebus, Ltd., as torn between two desires, one genuine, the other "less than genuine."

Giving their reasons for remitting back to the L.A. the quantum of vehicles to he allowed to the applicants, the Tribunal said that the statistical information given related to the years preceding the 1960 budget, when the furniture trade had "notoriously been enjoying a boom" which, by the time the appeal was heard, had come to an end. It was obvious that the grant should be related to future transport requirements.