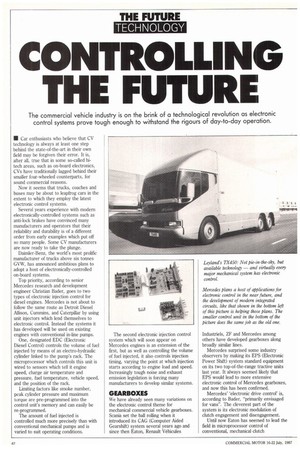 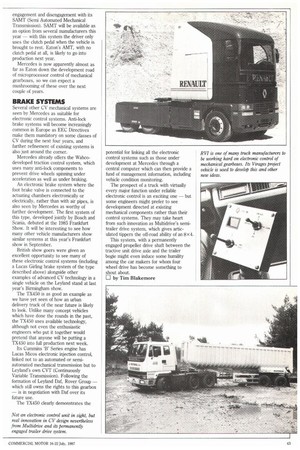 • Car enthusiasts who believe that CV technology is always at least one step behind the state-of-the-art in their own field may be forgiven their error. It is, after all, true that in some so-called hitech areas, such as on-board electronics, CVs have traditionally lagged behind their smaller four-wheeled counterparts, for sound commercial reasons.

Now it seems that trucks, coaches and buses may be about to leapfrog cars in the extent to which they employ the latest electronic control systems.

Several years experience with modern electronically-controlled systems such as anti-lock brakes have convinced many manufacturers and operators that their reliability and durability is of a different order from early examples which put off so many people. Some CV manufacturers are now ready to take the plunge.

Daimler-Benz, the world's most prolific manufacturer of trucks above six tonnes GVW, has announced ambitious plans to adopt a host of electronically-controlled on-board systems.

Top priority, according to senior Mercedes research and development engineer Christian Bader, goes to two types of electronic injection control for diesel engines. Mercedes is not about to follow the same route as Detroit Diesel Allison, Cummins, and Caterpillar by using unit injectors which lend themselves to electronic control. Instead the systems it has developed will be used on existing engines with conventional in-line pumps.

One, designated EDC (Electronic Diesel Control) controls the volume of fuel injected by means of an electro-hydraulic cylinder linked to the pump's rack. The microprocessor which controls this unit is wired to sensors which tell it engine speed, charge air temperature and pressure, fuel temperature, vehicle speed, and the position of the rack.

Limiting factors like smoke number, peak cylinder pressure and maximum torque are pre-programmed into the control unit's memory and can easily be re-programmed.

The amount of fuel injected is controlled much more precisely than with conventional mechanical pumps and is varied to suit operating conditions. The second electronic injection control system which will soon appear on Mercedes engines is an extension of the first, but as well as controlling the volume of fuel injected, it also controls injection timing, varying the point at which injection starts according to engine load and speed. Increasingly tough noise and exhaust emission legislation is forcing many manufacturers to develop similar systems.

We have already seen many variations on the electronic control theme for mechanical commercial vehicle gearboxes. Scania set the ball rolling when it introduced its CAG (Computer Aided Gearshift) system several years ago and since then Eaton, Renault Velicules Industriels, ZF and Mercedes among others have developed gearboxes along broadly similar lines.

Mercedes surprised some industry observers by making its EPS (Electronic Power Shift) system standard equipment on its two top-of-the-range tractive units last year. It always seemed likely that EPS would lead to more extensive electronic control of Mercedes gearboxes, and now this has been confirmed.

Mercedes' electronic drive control' is, according to Bader, "primarily envisaged for vans". The cleverest part of the system is its electronic modulation of clutch engagement and disengagement.

Until now Eaton has seemed to lead the field in microprocessor control of conventional, mechanical clutch engagement and disengagement with its SAMT (Semi Automated Mechanical Transmission). SAMT will be available as an option from several manufacturers this year — with this system the driver only uses the clutch pedal when the vehicle is brought to rest. Eaton's AMT, with no clutch pedal at all, is likely to go into production next year.

Mercedes is now apparently almost as far as Eaton down the development road of microprocessor control of mechanical gearboxes, so we can expect a mushrooming of these over the next couple of years.

Several other CV mechanical systems are seen by Mercedes as suitable for electronic control systems. Anti-lock brake systems will become increasingly common in Europe as EEC Directives make them mandatory on some classes of CV during the next four years, and further refinement of existing systems is also just around the corner.

Mercedes already offers the Wabcodeveloped traction control system, which uses many anti-lock components to prevent drive wheels spinning under acceleration as well as under braking.

An electronic brake system where the foot brake valve is connected to the actuating chambers electronically or electrically, rather than with air pipes, is also seen by Mercedes as worthy of further development. The first system of this type, developed jointly by Bosch and Scania, debuted at the 1985 Frankfurt Show. It will be interesting to see how many other vehicle manufacturers show similar systems at this year's Frankfurt show in September.

British show goers were given an excellent opportunity to see many of these electronic control systems (including a Lucas Girfing brake system of the type described above) alongside other examples of advanced CV technology in a single vehicle on the Leyland stand at last year's Birmingham show.

The TX450 is as good an example as we have yet seen of how an urban delivery truck of the near future is likely to look. Unlike many concept vehicles which have done the rounds in the past, the TX450 uses available technology, although not even the enthusiastic engineers who put it together would pretend that anyone will be putting a TX450 into full production next week.

Its Cummins 'B' Series engine has Lucas Micos electronic injection control, linked not to an automated or semiautomated mechanical transmission but to Leyland's own CVT (Continuously Variable Transmission). Following the formation of Leyland Daf, Rover Group — which still owns the rights to this gearbox — is in negotiation with Daf over its future use.

The TX450 clearly demonstrates the potential for linking all the electronic control systems such as those under development at Mercedes through a central computer which can then provide a fund of management information, including vehicle condition monitoring.

The prospect of a truck with virtually every major function under reliable electronic control is an exciting one — but some engineers might prefer to see development directed at existing mechanical components rather than their control systems. They may take heart from such innovation as Multidrive's semitrailer drive system, which gives articulated tippers the off-road ability of an 8x 4.

This system, with a permanently engaged propeller drive shaft between the tractive unit drive axle and the trailer bogie might even induce some humility among the car makers for whom four wheel drive has become something to shout about.