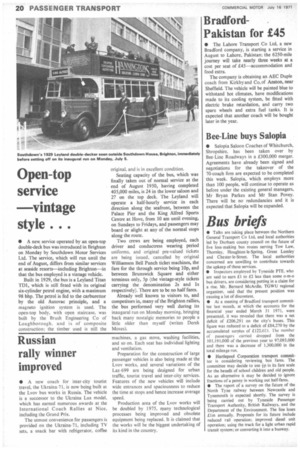 • A new, service operated by an open-top double-deck bus was introduced in Brighton on Monday by Southdown Motor Services Ltd. The service, which will run until the end of August, differs from similar services at seaside resorts—including Brighton—in that the bus employed is a vintage vehicle.

Built in 1929, the bus is a Leyland Titan TDI, which is still fitted with its original six-cylinder petrol engine, with a maximum 98 bhp. The petrol is fed to the carburettor by the old Autovac principle, and a magneto ignition system is used. The open-top body, with open staircase, was built by the Brush Engineering Co of Loughborough. and is of composite construction: the timber used is still the

original, and is in excellent condition, Seating capacity of the bus, which was finally taken out of normal service at the end of August 1950, having completed 405,000 miles, is 24 in the lower saloon and 27 on the top deck. The Leyland will operate a half-hourly service in each direction along the seafront, between the Palace Pier and the King Alfred Sports Centre at Hove, from 10 am until evening, on Sundays to Fridays, and passengers may board or alight at any of the normal stops along the route.

Two crews are being employed, each driver and conductress wearing period uniforms, and original pre-valued tickets are being issued, cancelled by original Williamson Bell Punch ticket machines, the fare for the through service being 10p, and between Brunswick Square and either terminus only, 5p (the vintage-style tickets carrying the denomination 2s and Is respectively). There are to be no half fares.

Already well known to visitors to, and competitors in, many of the Brighton rallies, the bus performed very well during its inaugural run on Monday morning, bringing back many nostalgic memories to people a little older than myself (writes Derek Moses).