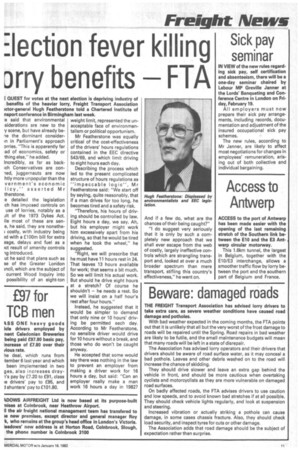 E QUEST for votes at the next election is depriving industry of benefits of the heavier lorry, Freight Transport Association mtor-general Hugh Featherstone told a Chartered Institute of nsport conference in Birmingham last week.

le said that environmental siderations are new to the y scene, but have already bene the dominant considerm in Parliament's approach orries. "This is apparently far !ad of economics, safety or thing else," he added.

le detailed the legislation ich has imposed controls on use of lorries, notably as a ut of the 1973 Dykes Act. ile most of these are sene, he said, they are nonethe; costly, with industry being KI with a £100m bill for extra sage, delays and fuel as a )ct result of amenity controls nig introduced.

ut he said that plans such as se of the Greater London which are the subject of current Wood Inquiry into possibility of an eight-ton weight limit, represented the unacceptable face of environmentalism or political opportunism.

Mr Featherstone was equally critical of the cost-effectiveness of the drivers' hours regulations contained in the EEC directive 543/69, and which limit driving to eight hours each day.

Describing the process which led to the present complicated structure of hours regulations as "impeccable logic", Mr Featherstone said: "We start off by saying, quite reasonably, that if a man drives for too long, he becomes tired and a safety risk.

"Therefore, his hours of driving should be controlled by law. Eight hours a day, we say. Ah, but his employer might work him excessively apart from his driving, so that he would be tired when he took the wheel," he suggested.

"Right, we will prescribe that he must have 11 hours rest in 24. That leaves 13 hours available for work; that seems a bit much. So we will limit his actual work. But should he drive eight hours at a stretch? Of course he shouldn't — he needs a rest. So we will insist on a half hour's rest after four hours."

Instead, he suggested that it would be simpler to demand that only nine or 10 hours' driving be permitted each day. According to Mr Featherstone, no sensible driver would drive for 10 hours without a break, and those who do won't be caught anyway.