• Barrow Borough Transport could be sold off intact by 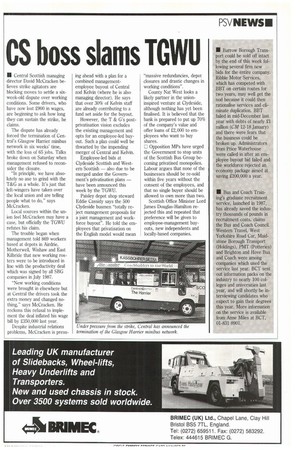 Page 17, 16th February 1989 — • Barrow Borough Transport could be sold off intact by
Close
Noticed an error?
If you've noticed an error in this article please click here to report it so we can fix it.
Keywords : Maidstone, Ribble Motor Services, Business / Finance

the end of this week following several firm new bids for the entire company. Ribble Motor Services, which has competed with BBT on certain routes for two years, may well get the nod because it could then rationalise services and eliminate duplication. BBT failed in mid-December last year with debts of nearly 21 million (CM 12-18 January) and there were fears that the business could be broken up. Administrators from Price Waterhouse were called in after an employee buyout bid failed and the workforce rejected an economy package aimed at saving 2200,000 a year.

• Bus and Coach Training's graduate recruitment service, launched in 1987, has already saved the industry thousands of pounds in recruitment costs, claims the Bus and Coach Council. Western Travel, West Yorkshire Road Car, Maidstone Borough Transport (Holdings), PMT (Potteries) and Brighton and Hove Bus and Coach were among companies which used the service last year. BCT sent out information packs on the industry to nearly 100 colleges and universities last year, and will shortly be interviewing candidates who expect to gain their degrees this year. More information on the service is available from Anne Miles at BCT, 01-831 8901.