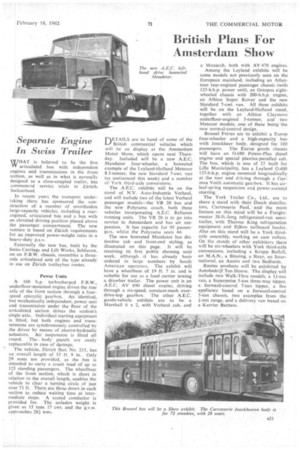 Page 27, 16th February 1962 — British Plans For Amsterdam Show
Close
Noticed an error?
If you've noticed an error in this article please click here to report it so we can fix it.
Keywords : Leyland Motors, Albion Motors, Associated Equipment Company

nETAILS are to hand of some of the

British commercial vehicles which will be on display at the Amsterdam Motor Show, which opens next Thursday. Included will be a new A.E.C. Mandator four-wheeler, a bonneted example of the Leyland-Holland Meteoor 8.5-tonner. the new Standard 7-cwt. van (as announced this week) and a number of York third-axle conversions.

The A.E.C. exhibits will be on the stand of N.V. Auto-Industrie Verheul. and will include two of the latest Verheul passenger models—the VB 20 bus and the new Polyrama coach, both these vehicles incorporating A.E.C. Reliance running units_ The VB 20 is to go into service in Amsterdam and has air suspension. It has capacity for 95 passengers, whilst the Polyrama seats 44.

The new bonneted Mandator has distinctive cab and front-end styling, as illustrated on this page. It will be receiving its first public showing next week, although it has already been ordered in large numbers by South American operators. The exhibit will have a wheelbase of 19 ft. 7 in. and is suitable for use as a load carrier towing a drawbar trailer. The power unit is an A.E.C. AV 690 diesel engine, driving through a six-speed, constant-mesh overdrive-top gearbox. The other A.E.C. goods-vehicle exhibits are to be a Marshall 6 x 2, with Verheul cab, and

Among the Leyland exhibits will be some models not previously seen on the European mainland, including an Atlantean rear-engined passenger chassis (with 125-b.h.-p. power unit), an Octopus eightwheeled chassis with 200-b.h.p. engine, an Albion Super Reiver and the new Standard 7-cwt. van. All these exhibits will be on the Leyland-Holland stand, together with an Albion Claymore underfloor-engined 5-tonner, and two Meteoor models, one of these being 'the new normal-control design.

Brossel Freres are to exhibit a Europ four-wheeler and a high-capacity bus with Jonckheer body, designed for 100 passengers. The Europ goods chassis will have an 0.680 Power-Plus diesel engine and special plastics-panelled cab. The bus, which is one of 25 built for Lille Municipality, has a Leyland 0.400 125-b.h.p. engine mounted longitudinally at the rear and driving through a Ger: man Voith automatic gearbox. It has airleaf-spring suspension and power-assisted steering.

The York Trailer Co., Ltd., are to share a stand with their Dutch distributors, Carrosserie Paul, and' the main feature on this stand will be a Freightmaster 38-ft.-long refrigerated-van semitrailer. with Thermo King refrigeration equipment and Edbro tailboard loader. Also on this stand will be a York thirdaxle assembly, working on earn rollers. On the stands of other exhibitors there will be six-wheelers with York third-axle conversions, including a Krupp Buffell, an M.A.N„ a Bussing, a Steyr, an International, an Austin and two Bedfords.

Rootes products will be exhibited by Autobedrijf Ten Hoeve. The'display will include two Walk-Thru models, a 11-ton van, a Superpoise 5-ton three-way tipper, a forward-control 7-ton tipper, a fire appliance based on a forward-control 5-ton chassis, two examples from the 1-ton range, and a delivery van based on a Karrier Bantam.