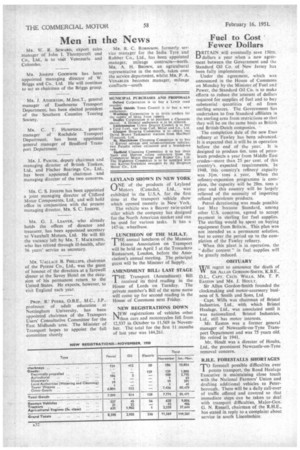 Page 34, 16th February 1951 — Fuel to Cost Fewer Dollars
Close
Noticed an error?
If you've noticed an error in this article please click here to report it so we can fix it.
Keywords : Fuels, Oils, Petroleum, Business / Finance

BRITAIN will eventually save 150m. dollars a year when a new agreement between the Government and the Standard Oil Co. of New Jersey has been fully implemented.

Under the agreement, which was announced in the House of Commons on Monday by the Minister of Fuel and Power, the Standard Oil Co. is to make efforts to reduce the amount of dollars required for supplies of fuel and to buy substantial quantities of oil from sterling sources. The Government has undertaken to free Standard affiliates in the sterling area from restrictions so that they will be on the same basis as British and British-Dutch companies. • The completion date of the new Esso refinery at Fawley has been advanced. It is expected that it will be in operation before the end of the year. It is designed to produce Gm. tons of petroleum products a year from Middle East crudes—more than 25 per cent. of this country's expected requirements. In 1948, this country's refinery; capacity was 3m. tons a year. When the refinery-expansion programme is corn-' oleic, the capacity will be 20m, tons a year and this country will be largely relieved of the necessity of importing refined petroleum products.

Petrol derationing was made possible last May because Standard, among other U.S. concerns, agreed to accept payment in sterling for fuel supplies. The sterling would be spent on buying equipment from Britain. This plan was not intended as a permanent solution, but to cover the period up to the completion of the Fawley refinery.

When this plant is in operation, the " dollar content" in fuel supplies will be greatly reduced.

Mr. Easton was a former general manager of Newcastle-on-Tyne Transport Department and was 75 years old. He retired in 1941.

Mr. Hoult was a director of Hoults. Ltd., the prominent Newcastle-on-Tyne removal concern.

TO forestall possible difficulties over potato transport, the Road Haulage Executive is maintaining close touch with the National Farmers' Union and drafting additional vehicles to Peterborough. There will be a daily call-over of traffic offered and covered so that immediate steps can be taken to deal with transport difficulties, Major-Gen. G. N. Russell, chairman of the R.H.E., has stated in reply to a complaint about service in south Lincolnshire.