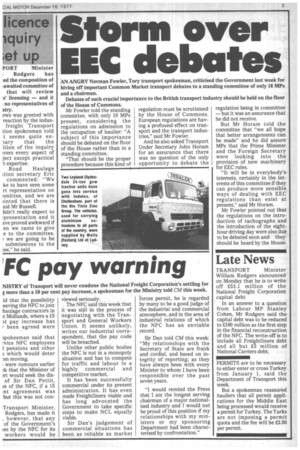 Page 5, 16th December 1977 — Storm over debates
Close
Noticed an error?
If you've noticed an error in this article please click here to report it so we can fix it.
Keywords : John Horam, Norman Fowler, Horam, Politics

AN ANGRY Norman Fowler, Tory transport spokesman, criticised the Government last week for hiving off important Common Market transport debates to a standing committee of only 16 MPs and a chairman.

Mr Fowler told the standing committee, with only 10 MPs present, considering the regulations on admission to the occupation of haulier: "A subject of this importance should be debated on the floor of the House rather than in a standing committee.

"That should be the proper procedure because this kind of regulation must be scrutinised by the House of Commons. European regulations are having a profound effect on transport and the transport industries," said Mr Fowler.

And he also asked Transport Under Secretary John Horam for an assurance that there was no question of the only opportunity to debate the regulation being in committee — but it was an assurance that he did not receive.

But Mr Horam told the committee that "we all hope that better arrangements can be made" and he did assure MPs that the Prime Minister and the Foreign Secretary were looking into the provision of new machinery for EEC rules.

"It will be in everybody's interests, certainly in the interests of this committee if they can produce more sensible ways of dealing with EEC regulations than exist at present," said Mr Horam.