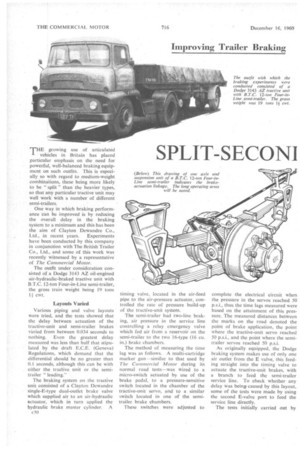 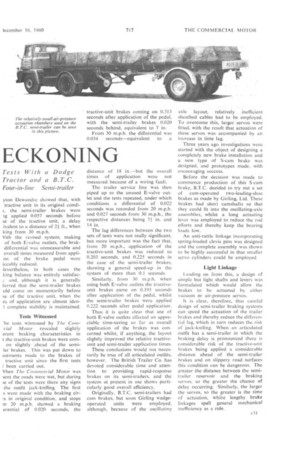 Page 66, 16th December 1960 — SPLITSECONI ECKONING
Close
Noticed an error?
If you've noticed an error in this article please click here to report it so we can fix it.

Tests With a Dodge Tractor and a B.T.C. Four-in-line Semi-trailer

THE growing use of articulated vehicles in Britain has placed particular emphasis on the need for powerful, well-balanced braking equipment on such outfits. This is especially so with regard to medium-weight combinations, these being more likely to be " split " than the heavier types, so that any particular tractive unit may well work with a number of different semi-trailers.

One way in which braking performance can be improved is by reducing the overall delay in the braking system to a minimum and this has been the aim of Clayton Dewandre Co., Ltd., in recent years. Experiments have been conducted by this company in conjunction with The British Trailer Co., Ltd., and some of this work was recently witnessed by a representative of The Commercial Motor.

Various piping and valve layouts were tried, and the tests showed that the delay between actuation of the tractive-unit and semi-trailer brakes varied from between 0.034 seconds to nothing. Even the greatest delay measured was less than half that stipulated by the draft E.C.E. (Geneva) Regulations, which demand that the differential should be no greater than 0.1 seconds, although this can be with either the tractive unit or the semitrailer "leading."

The braking system on the tractive unit consisted of a Clayton Dewandre single-E-type dual-outlet brake valve which supplied air, to an air-hydraulic actuator, which in turn applied the hydraulic brake master cylinder. A c30 timing valve, located in the air-feed pipe to the air-pressure actuator, controlled the rate of pressure build-up of the tractive-unit system.

The semi-trailer had two-line braking, air pressure in the service line controlling a relay emergency valve which fed air from a reservoir on the semi-trailer to the two 16-type (16 Cu. in.) brake chambers.

The method of measuring the time lag was as follows. A multi-cartridge marker gun--similar to that used by The Commercial Motor during its normal road tests—was Wired to a micro-switch actuated by use of the brake pedal, to a pressure-sensitive switch located in the chamber of the tractive-unit servo, and to a similar switch located in one of the semitrailer brake chambers.

These switches were adjusted to

As originally equipped, the Dodge braking system makes use of only one air outlet from the E valve, this feeding straight into the timing valve to actuate the tractive-unit brakes, with a branch to feed the semi-trailer service line. To check whether any delay was being caused by this layout, some of the tests were made by using the second E-valve port to feed the service line directly.

The tests initially carried out by

yton Dewandre showed that, with tractive unit in its original condi', the semi-trailer brakes were ig applied 0.057 seconds before se of the tractive unit, a delay ivalent to a distance of 21 ft., when king from 30 m.p.h.

Vith the revised system, making of both E-valve outlets, the brakdifferential was immeasurable and overall times measured from applion of the brake pedal were iceably reduced.

4evertheless, in both cases the king balance was entirely satisfac.7 and, although it is generally rerred that the semi-trailer brakes uld come on momentarily before se of the tractive unit, when the es of application are almost iden1 complete stability is maintained.

Tests Witnessed he tests witnessed by The Colnvial Motor revealed slightly erent braking characteristics in the tractive-unit brakes were cornon slightly ahead of the semiler brakes. This was put down to ustments made to the brakes of tractive unit since the first tests been carried out.

Vhen The Commercial Motor was sent the roads were wet, but during Le of the tests were there any signs the outfit jack-knifing. The first s were made with the braking cirls in original condition, and stops m 20 m.p.h. showed a braking erential of 0.020 seconds, the

tractive-unit brakes coming on 0,313 seconds after application of the pedal, with the semi-trailer brakes 0.020 seconds behind, equivalent to 7 in.

From 30 m.p.h. the differential was 0.034 seconds—equivalent to a distance of 18 in.—but the overall times of application were not measured because of a wiring fault.

The trailer service line was then piped up to the unused E-valve outlet and the tests repeated, under which conditions a differential of 0,022 seconds was recorded from 20 m.p.h. and 0.027 seconds from 30 m.p.h., the respective distances being 74 in. and 14 in.

The lag differences between the two sets of tests were not really significant, but more important was the fact that, from 20 m.p.h., application of the traCtive-unit brakes was reduced to 0.203 seconds, and 0.225 seconds in the case of the semi-trailer brakes, showing a general speed-up in the system of more than 0.1 seconds.

Similarly, from 30 m.p.h. when using both E-valve outlets the tractiveunit brakes came on 0.195 seconds after application of the pedal, whilst the semi-trailer brakes were applied 0.222 seconds after pedal application.

Thus it is quite clear that use of both E-valve outlets effected an appreciable time-saving so far as overall application of the brakes was concerned whilst, if anything, the layout slightly improved the relative tractiveunit and semi-trailer application times.

These conclusions would not necessarily be true of all articulated outfits. however. The British Trailer Co. has devoted considerable time and attention to providing rapid-response brakes on its semi-trailers, and the system at present in use shows particularly good overall efficiency.

Originally, B.T.C. semi-trailers had cam brakes, but soon Girling wedgeoperated units were employed, although, because of the oscillating

axle layout, relatively inefficient' sheathed cables hadto be employed. To overcome this, larger -servos were fitted, with the result that actuation of these servos was accompanied by an increase in time lag.

Three years ago investigations were started with the object of designing a completely new, brake installation and a new type of S-cam brake was designed, and prototypes made, with encouraging success.

Before the decision was made to commence production of this S-cam brake, B.T.C. decided to try out a set of cam-operated two-leading-shoe brakes as made by Girling, Ltd., These brakes had short camshafts so that they could fit into the oscillating-axle . assemblies, whilst a long actuating lever was employed to reduce the rod efforts and thereby keep the bearing loads low.

An anti-rattle linkage incorporating spring-loaded clevis pins was designed and the complete assembly was shown to be highly successful in that smaller servo cylinders could be employed Light Linkage Leading on from this, a design of simple but light shafts and levers was formulated which would allow the brakes to be actuated by either vacuum or air-pressure servos.

It is clear, therefore, that careful design of semi-trailer braking systems can speed the actuation of the trailer brakes and thereby reduce the differential lag, which in turn reduces the risk or jack-knifing. When an articulated outfit has a semi-trailer in which the braking delay is pronounced there is considerable risk of the tractive-unit brakes being applied a considerable distance ahead of the semi-trailer brakes and on slippery road surfaces this condition can be dangerous. The greater the distance between the semitrailer reservoir and the braking servos, so the greater the chance of delay occurring. Similarly, the larger the servos, so the greater is the time of actuation, whilst lengthy brake linkages spell general mechanical inefficiency as a rule.