NEWS IN BRIEF Glasgow Fares Rise Likely: With an estimated 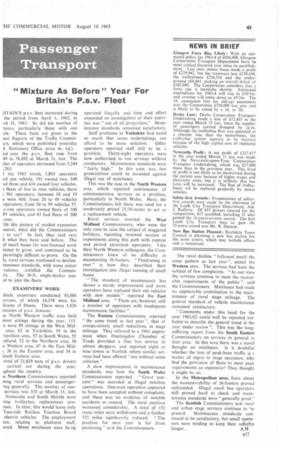 Derby Loss: Derby Corporation Transport Undertaking made a loss of £12,453 in the year ended March 31 last, when the number of passengers carried dropped by 2-f m. Although the trolleybus fleet was operated at a cheaper rate than the motorbuses, the trolleybus system appears to be doomed because of the high capital cost of replacing vehicles.

Newcastle Profit: A net profit of £227,477 in the year ended March 31 last was made by the Newcastle-upon-Tyne Corporation Transport Undertaking, which was £27,000 more than in the previous year. This level of profit is not likely to be maintained during the current year because of higher wages and electricity costs, but it is unlikely that bus fares will be increased. The fleet of trolley. buses wil be replaced gradually by motor vehicles.

Safety-first Awards: Presentations of safetyfirst awards were made by the chairman of the Leeds City Transport Department, Ald. J. Rafferty. Of 857 drivers entered for the competition. 617 qualified, including 31 who gained the 10-years-or-over award. The first Leeds City Transport man to gain the 35-years award was Mr. B. Denton.

New Bus Station Planned : Rochdale Town Council is planning a new bus station for the town centre, which may include offices and a restaurant.