Suspension is quashed • The Transport Tribunal has quashed Scottish 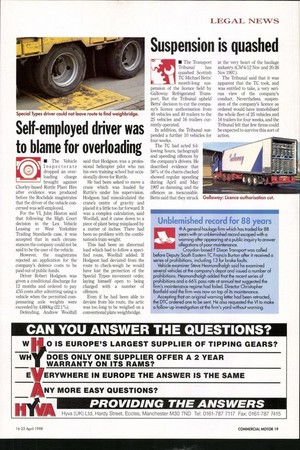 Page 21, 16th April 1998 — Suspension is quashed • The Transport Tribunal has quashed Scottish
Close
Noticed an error?
If you've noticed an error in this article please click here to report it so we can fix it.

TC Michael Betts' month-long suspension of the licence held by Galloway Refrigerated Transport. But the Tribunal upheld Betts' decision to cut the company's licence authorisation from 40 vehicles and 40 trailers to the 25 vehicles and 16 trailers currently operated.

In addition, the Tribunal suspended a further 10 vehicles for four weeks.

The TC had acted following hours, tachograph and speeding offences by the company's drivers. He described evidence that 58% of the charts checked showed regular speeding during April and May 1997 as damning, and the offences as inexcusable. Betts said that they struck at the very heart of the haulage industry (CM 6-12 Nov and 20-26 Nov 1997.) The Tribunal said that it was apparent that the TC took, and was entitled to take, a very serious view of the company's conduct. Nevertheless, suspension of the company's licence as ordered would have immobilised the whole fleet of 25 vehicles and 16 trailers for four weeks, and the Tribunal felt that few firms could be expected to survive this sort of action.