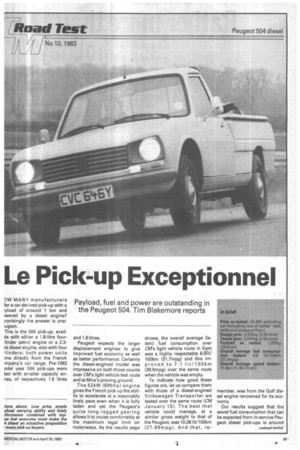 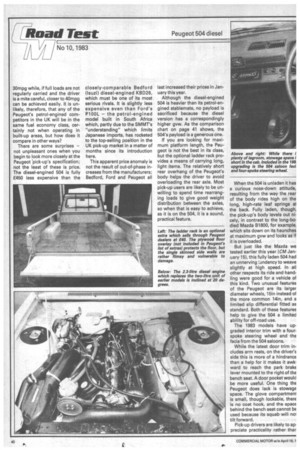 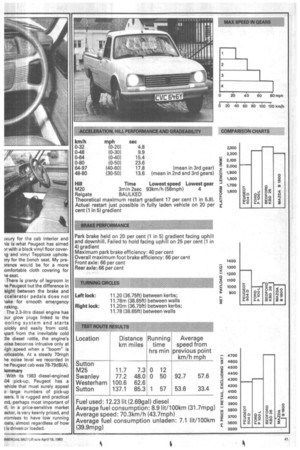 Payload, fuel and power are outstanding in the Peugeot 504. Tim Blakemore reports

DW MANY manufacturers fer a car-derived pick-up with a iyload of around 1 ton and )wered by a diesel engine? Jrprisingly the answer is one: )ugeot.

Peugeot expects the larger displacement engines to give improved fuel economy as well as better performance. Certainly the diesel-engined model was impressive on both those counts over CM's light vehicle test route and at Mire's proving ground.

The 52kW (69bhp) engine gives the French pick-up the ability to accelerate at a reasonably lively pace even when it is fully laden and yet the Peugeot's quite long-legged gearing allows it to cruise comfortably at the maximum legal limit on motorways. As the results page shows, the overall average (laden) fuel consumption over Cflirs light vehicle route in Kent was a highly respectable 8.91it/ 100km (313mpg) and this improved to 7_1 lit/1 0 0 km (39.9mpg) over the same route when the vehicle was empty.

To indicate how good these figures are, let us compare them with those of a diesel-engined Volkswagen Transporter we tested over the same route (CM January 15). The best that vehicle could manage, at a similar gross weight to that of the Peugeot, was 10.08 lit/100km (27.99mpg). And that, re member, was from the Golf diesel engine renowned for its economy.

Our results suggest that the worst fuel consumption that can be expected from in-service Peugeot diesel pick-ups is around 30mpg while, if full loads are not regularly carried and the driver is a mite careful, closer to 40mpg can be achieved easily. It is unlikely, therefore, that any of the Peugeot's petrol-engined competitors in the UK will be in the same fuel economy class, certainly not when operating in built-up areas, but how does it compare in other ways?

There are some surprises — not unpleasant ones when you begin to look more closely at the Peugeot 'pick-up's specification; not the least of these is price. The diesel-engined 504 is fully £450 less expensive than the closely-comparable Bedford (Isuzi) diesel-engined KB1326, which must be one of its most serious rivals. It is slightly less expensive even than Ford's P100L — the petrol-engined model built in South Africa which, partly due to the SMMT's "understanding" which limits Japanese imports, has rocketed to the top-selling position in the UK pick-up market in a matter of months since its introduction here.

This apparent price anomaly is not the result of out-of-phase increases from the manufacturers; Bedford, Ford and Peugeot all last increased their prices in January this year.

Although the diesel-engined 504 is heavier than its petrol-engined stablemate, no payload is sacrificed because the diesel version has a correspondingly higher gvw. As the comparison chart on page 41 shows, the 504's payload is a generous one.

If you are looking for maximum platform length, the Peugeot is not the best in its class, but the optional ladder rack provides a means of carrying long, light items. The relatively short rear overhang of the Peugeot's body helps the driver to avoid overloading the rear axle. Most pick-up users are likely to be unwilling to spend time rearranging loads to give good weight distribution between the axles, so when that is easy to achieve, as it is on the 504, it is a sound, practical feature. When the 504 is unladen it has a curious nose-down attitude, resulting from the way the rear of the body rides high on the long, high-rate leaf springs a1 the back. Fully laden, though, the pick-up's body levels out nicely, in contrast to the long-bodied Mazda B1800, for example, which sits down on its haunches at maximum gvw and looks as if it is overloaded.

But just like the Mazda we tested earlier this year (CM January 15), this fully laden 504 had an unnerving tandency to weave slightly at high speed. In all other respects its ride and handling were good for a vehicle of this kind. Two unusual features of the Peugeot are its larger diameter wheels, Thin instead of the more common 14in, and a limited slip differential fitted as standard. Both of these features help to give the 504 a limited #bility for off-road use.

The 1983 models have upgraded interior trim with a fourspoke steering wheel and the facia from the 504 saloons.

While the latest door trim includes arm rests, on the driver's side this is more of a hindrance than a help for it makes it awk. ward to reach the park brake lever mounted to the right of the bench seat. A door pocket would be more useful. One thing the Peugeot does lack is stowage space. The glove compartment is small, though lockable, there is no coat hook, and the spacE behind the bench seat cannot be used because its squab will not tilt forward.

Pick-up drivers are likely to ap preciate practicality rather thar

Jxury for the cab interior and us is what Peugeot has aimed Dr with a black vinyl floor coverng and vinyl Teppiuxe uphols9ry for the bench seat. My prem.ence would be for a more omfortable cloth covering for ne seat.

There is plenty of legroom in le Peugeot but the difference in eight between the brake and ccelerator pedals does not lake for smooth emergency raking.

The 2.3-litre diesel engine has our glow plugs linked to the ooling system and starts iuickly and easily from cold.

■ part from the inevitable cold lle diesel rattle, the engine's loise becomes intrusive only at ligh speed when a "boom" is loticeable. At a steady 70mph he noise level we recorded in he Peugeot cab was 78-79dB(A). kimmary With its 1983 diesel-engined Oil pick-up, Peugeot has a ,thicle that must surely appeal o large numbers of pick-up isers. It is rugged and practical Ind, perhaps most important of ;II, in a price-sensitive market ;actor, is very keenly priced, and iromises to have low running :osts, almost regardless of how t is driven or loaded.