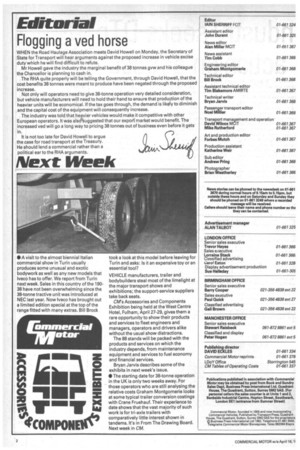 Page 4, 16th April 1983 — Next Week
Close
Noticed an error?
If you've noticed an error in this article please click here to report it so we can fix it.
Keywords : Fiat, Iveco, Bodybuilding, Business / Finance

• A visitto the almost biennial Italian commercial show in Turin usually produces some unusual and exotic bodywork as well as any new models that Iveco has to offer. We report from Turin next week. Sales in this country of the 19038 have not been overwhelming since the 38-tonne tractive unit was introduced at NEC last year. Now lveco has brought out a limited edition special at the top of the range fitted with many extras. Bill Brock took a look at this model before leaving for Turin and asks: Is it an expensive toy or an essential tool?

VEHICLE manufacturers, trailer and bodybuilders steal most of the limelight at the major transport shows and exhibitions; the support-service suppliers take back seats.

GM's Accessories and Components Exhibition being held at the West Centre Hotel, Fulham, April 27-29, gives them a rare opportunity to show their products and services to fleet engineers and managers, operators and drivers alike without the usual show distractions.

The 88 stands will be packed with the products and services on which the industry depends, from maintenance equipment and services to fuel economy and financial services.

Bryan Jarvis describes some of the exhibits in next week's issue.

• The starting date for 38-tonne operation in the UK is only two weeks away. For those operators who are still analysing the relative costs Graham Montgomerie looks at some typical trailer conversion costings with Crane Fruehauf. Their experience to date shows that the vast majority of such work is for tri-axle trailers with comparatively little interest shown in tandems. It's in From The Drawing Board. Next week in CM.