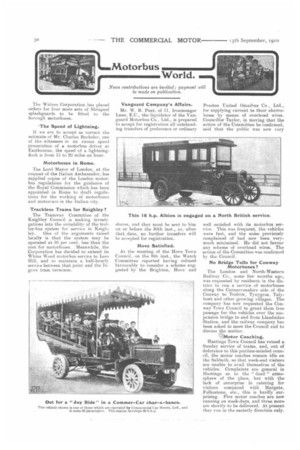 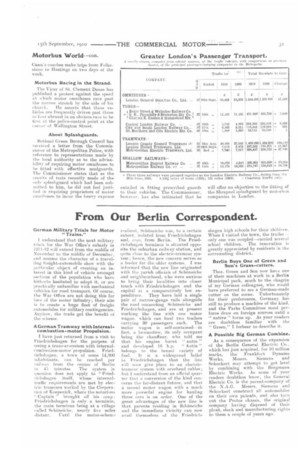 The 'Widnes Corporation has placed orders for four more sets of Shrapnel splashguards to he fitted to the borough motorbuses.

,,The Speed of Lightning.

If we sire to accept as correct the estimate of Mr. Charles Bachelor, one of the witnesses in an excess speed prosecution of a motorbus driver at Eastbourne, the speed of a lightningflash is from 15 to 20 miles an hour.

The Tramway Committee of the Keighley Council is making investigations into the suitability of the trolley-bus system for service in Keigli Iey. One of the arguments raised locally is that the system may be operated at 50 per cent. less than the cost for motorbuses. Meanwhile, the Corporation has decided to extend its Whins Wood niotorhus service to Lees Hill, and to maintain a half-hourly service between that point and the Ingrow tram terminus.

Mr. W. B. Peat, of 11, Ironmonger Lane, E,C., the liquidator of the Vanguard Motorbus Co., Ltd., is prepared to accept for registration all outstanding transfers of preference or ordinary

shares, and they must be sent to him on or before the 30th inst., as, after that, date, no further transfers will be accepted for registration.

At the meeting of the Hove Town Council, on the 8th inst., the Watch Committee reported having refused favourably to consider a scheme suggested by the Brighton, Hove and

Preston United Omnibus Co., Ltd., for supplying current to their electrobuses by means of overhead wires. Councillor Taylor, in moving that the action of -the Committee be confirmed, said that the public wa-s now very

well satisfied with its motorbus service. This was frequent, the vehicles were fast, and the noise previously complained of had now been verymuch minimized. He did not favour any scheme of overhead wires. The action of the Committee was confirmed by the Council.

No Bridge Tolls for Conway Motorbuses?

The London and North-Western Railway Co. some few months ago, was requested by residents in the district to run a service of motorbuses along the Carnarvonshire side of the Conway to Trefriw, Tynygros, Talybont and other growing villages. The company has now requested the Conway Town Council to grant them free passage for the vehicles over the suspension bridge to and from Llandudno Station, and the railway company has been asked to meet the Council and to discuss the matter.

Hastings Town Council has vetoed a Sunday service of trams, and, out of deference to this puritan-minded council, the motor coaches remain idle on the Sabbath, so that week-end visitors. are unable to avail themselves of the vehicles. Complaints are general in Hastings as to the " dead " atmosphere of the place, but with the lack of enterprise in catering for visitors compared with Margate, Folkestone, etc., this is hardly surprising. Five motor coaches are now running on week-days, and three more are shortly to be delivered. At present they run in the easterly direction only.

Cann's coaches make trips from Folkestone to Hastings on two days of the week.

Motorbus Racing in the Strand.

The Vicar of St. Clement Danes has published a protest against the speed at which motor omnibuses race past the narrow .stretch by the side of his church. He asserts that the ve hicles frequently driven past three

ii foolabreast in an obvious race to be first at the police-control point at the corner of Wellington Street,

Bethnal Green Borough Council has received a letter from the Commis. aiorter of the Metropolitan Police, with reference to representations made by the local authority as to the advisability of requiring motor omnibuses to he fitted with effective mudguards. The Commissioner states that as the reeillta of tests recently made of the only splashguard which had been submitted to him, he did not feel justified in requiring proprietors of motor omnibuses to incur the heavy expense